For the ninth consecutive year, Jeep 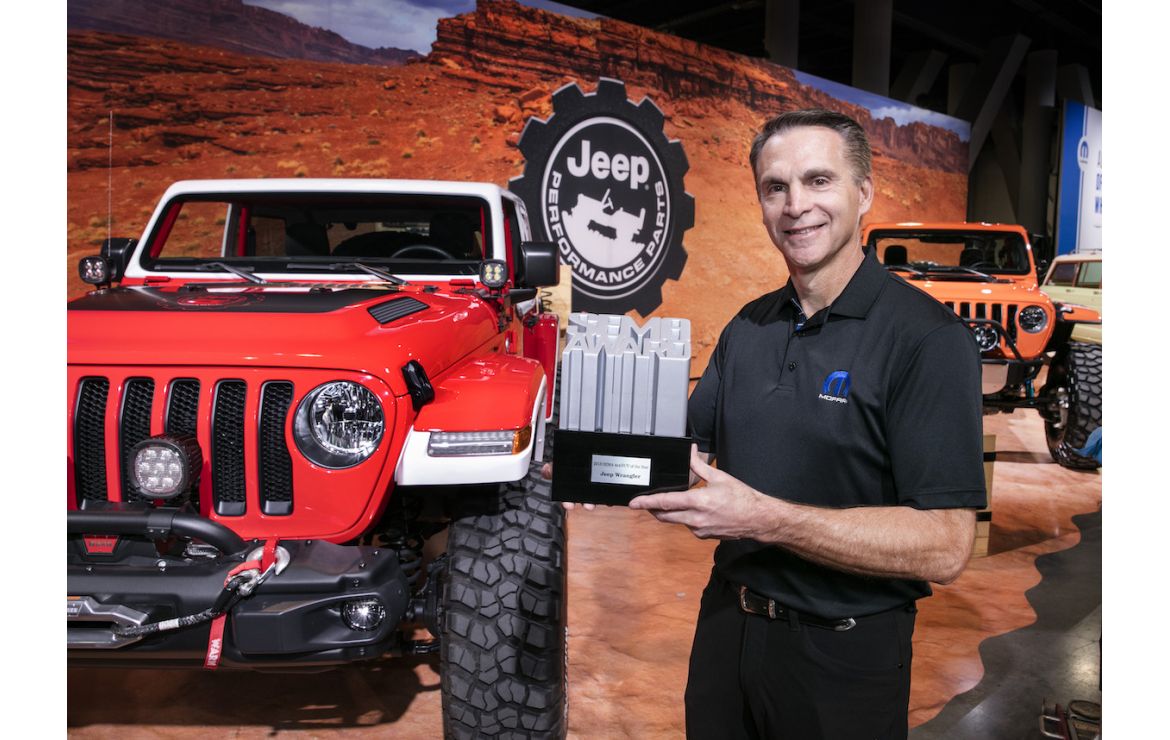 For the ninth consecutive year, Jeep® Wrangler is celebrating 4x4 / SUV of the Year honours at the Specialty Equipment Market Association (SEMA) Show in Las Vegas, following announcement of the 2018 award winners at the SEMA Vehicle Reveal event held outside of the Las Vegas Convention Centre on October 29.

Jeep Wrangler remains the only vehicle to earn the trophy since the 2010 launch of the SEMA Awards. Wrangler earned its customization crown in recognition as the most accessory-friendly vehicle in its class, as voted on by SEMA Show exhibitors.

“The Jeep Wrangler continues to lead the way in the customization world following the Mopar brand’s introduction late last year of more than 200 Jeep Performance Parts and accessories,” said Steve Beahm, Head of Parts & Service (Mopar) and Passenger Car Brands, FCA - North America. “When it comes to personalization, Jeep Wrangler is a star of our portfolio and it just keeps getting hotter.”

For the second consecutive year, the Ram 1500 pickup was recognized as one of three finalists in the SEMA Truck of the Year class, while the Dodge Challenger earned finalist honours in the SEMA Car of the Year category.

The SEMA Awards, first launched in 2010, are the SEMA Show’s definitive Original Equipment Manufacturer (OEM) award, shining a light on the hottest vehicles that showcase and launch aftermarket parts.

“Once again, the Jeep Wrangler is voted as a favourite from the aftermarket community, with more exhibitors choosing the Jeep Wrangler as the SEMA 4x4 / SUV of the Year,” said SEMA President and CEO Chris Kersting. “Whether drivers are accessorizing the Jeep for off-roading or for every day driving, there are outstanding options available for Jeep owners.”

The Mopar brand’s display at the 2018 SEMA Show featured customized versions of the SEMA award winner and finalists, including four Jeep vehicles transformed with Jeep Performance Parts and accessories and two Mopar-modified Ram 1500 pickups, the trail-themed Ram 1500 Rebel and the street-styled Ram 1500 Big Horn “Low Down.”

Mopar (a simple contraction of the words MOtor and PARts) is the service, parts and customer-care brand for FCA vehicles around the globe. Born in 1937 as the name of a line of antifreeze products, the Mopar brand has evolved over more than 80 years to represent both complete care and authentic performance for owners and enthusiasts worldwide.

Mopar made its mark in the 1960s during the muscle-car era, with Mopar Performance Parts to enhance speed and handling for both road and racing use and expanded to include technical service and customer support. Today, the Mopar brand’s global reach distributes more than 500,000 parts and accessories in over 150 markets around the world. With more than 50 parts distribution centres and 25 customer contact centres globally, Mopar integrates service, parts and customer-care operations in order to enhance customer and dealer support worldwide.

Mopar is the source for genuine parts and accessories for all FCA vehicle brands. Mopar parts are engineered together with the same teams that create factory-authorized specifications for FCA vehicles, offering a direct connection that no other aftermarket parts company can provide. Complete information on the Mopar brand is available at www.mopar.com.