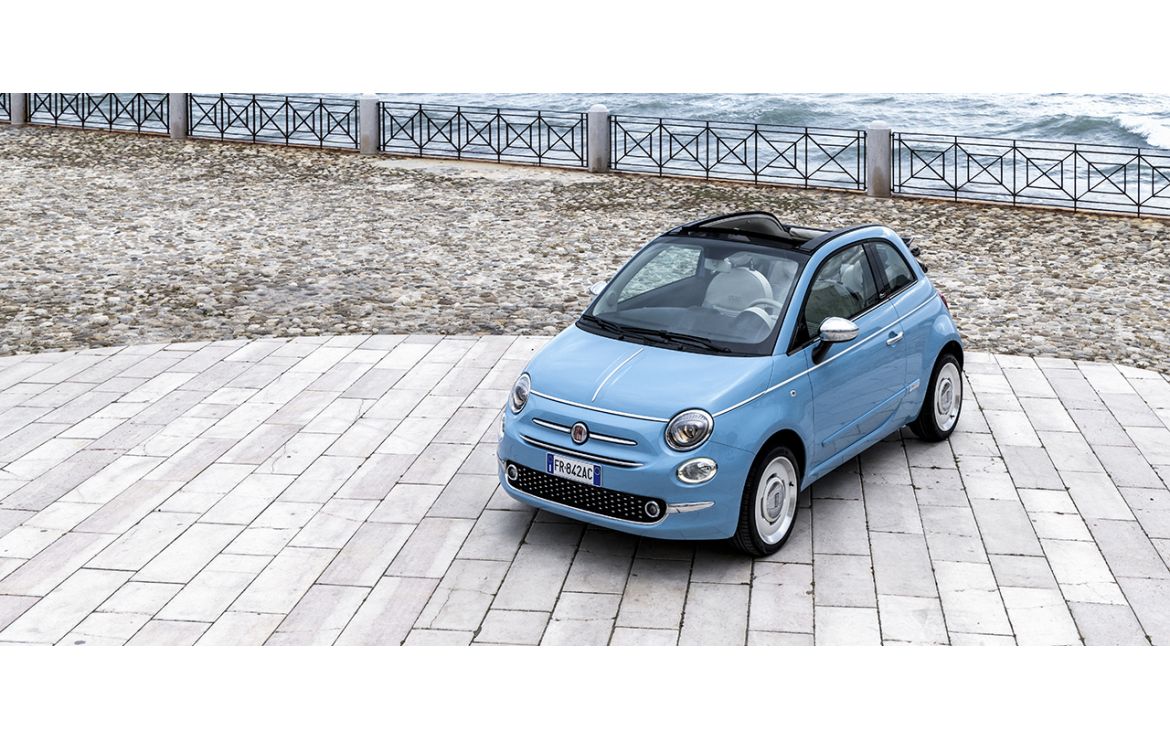 Summer 1958: a light breeze blows around the coast of Capri, caressing the hulls of the luxurious yachts moored in the harbour. On the quayside, the exclusive 500 Jolly, better known as the "Spiaggina", awaits its illustrious guests for a journey into the glittering night life of La Dolce Vita.

Summer 2018: coinciding with the Fiat 500's birthday, the iconic Spiaggina makes an elegant return to Europe's most famous resorts. Its new lease of life comes courtesy of the Fiat brand, which presents the new 500 Spiaggina '58 special edition, produced in a limited edition of 1,958 cars - a tribute to the year of the birth of the first Spiaggina, with ultra-chic design touches and a lavish standard outfit.

Available in the Middle East from 2019, this is the first of Fiat's two tributes to celebrate both the legendary little car's birthday and the 60th anniversary of its first special series - the unforgettable 500 Spiaggina - dating from 1958, which became a universally acclaimed symbol of La Dolce Vita. By marking these two important dates, Fiat also celebrates the secret of the 500's eternal youth: its capability to renew itself continually, through special editions, without ever losing its identity. And the Fiat brand has produced a second gift to celebrate these special milestones - a delightful video set to the famous song 'Volare', the ever-popular Italian classic which also appeared in 1958, and starring, of course, the new 500 Spiaggina '58.

"The new Spiaggina '58 is our birthday gift to the 500 for its birthday and the 60th anniversary of the Spiaggina," explained Luca Napolitano, Head of the Fiat and Abarth brands, EMEA. "It's a real time machine, incorporating many reminders of the Dolce Vita era, such as the vintage logos and wheels, the white waist rail, the convertible only format and two-tone interior. Not to mention a special colour exclusively for this edition, Volare Blue. A name and a colour that take us straight back to 1958, to the Sanremo Festival of that year, when a young Domenico Modugno teamed up with Johnny Dorelli to give the first public performance of 'Nel blu dipinto di blu', the famous song also known as 'Volare', which was the soundtrack for the Dolce Vita years."

Two other Italian centres of excellence - creative hub Garage Italia and design firm Pininfarina - have also celebrated the dual anniversary by producing the irresistible 'Spiaggina by Garage Italia' showcar. Based on a Fiat 500C, its features include unique, sophisticated styling cues that reinterpret those unforgettable years for today's world.

"Love at first sight, the kind that strikes deep into your heart and soul. This what I feel whenever I look at or drive a 500," said Lapo Elkann, Chairman and Creative Director of Garage Italia. "I fell in love with the car when I was a boy, and as I grew up I was determined to bring it back to life. I am so happy about the model's relaunch, and hope it will convey the dreams and the magical years of the post-war economic boom and the Italian way of enjoying life. Since 2007, year after year, I've always personalised 500's for myself, and the opening of Garage Italia has enabled us to design a multitude of one-off versions, all reconfirming the versatility and immense contemporary appeal of this vehicle, which is still one of the world's best-loved brands."

"11 years have passed since the model was reborn on 4 July 2007 and today, through Garage Italia, I've decided to celebrate and renew a splendid Italian icon by working with my Design Centre to create the Spiaggina by Garage Italia, styled by my team with invaluable technical and engineering input from Pininfarina and with the support of the Fiat brand. I'm proud of what we have achieved. And I'm proud that all this has been done in Italy, with Italian firms which promote our beloved country all around the world. I'm sure that this car will make people imagine, dream and interpret the Italian way of enjoying life that has been inspiring the world for generations."

"Creativity and feasibility, technology and craftsmanship are Pininfarina's trademark characteristics at the service of a new icon of Italian design and know-how," explained Pininfarina CEO Silvio Pietro Angori. "The Spiaggina project has enabled us to once again display our design capabilities and natural vocation for the creation of unique, exclusive models. It was passion and attention to detail which enabled the firm's founder, Pinin Farina, to build the Eden Roc for Giovanni Agnelli in the '50s. Today, those same qualities have guided Pininfarina in the development and building of the Spiaggina, starting from the configuration created by Garage Italia based on the Fiat 500C. The Spiaggina project has brought together companies and people which have made the car, as both an aesthetic object and industrial project, their mission."

Fiat's first tribute for the dual anniversary is the new Fiat 500 Spiaggina '58 special edition, produced in a limited edition of 1,958 cars and only available as a convertible, for full enjoyment of the open air and the appeal of a historic era indelibly imprinted on all our memories. And as befits a star of La Dolce Vita, the new special edition sports a splendid Volare Blue livery, with beige soft-top, shown off by the white waist rail and vintage-design 16" alloy wheels. The exclusive colour scheme is enhanced by other distinctive features, such as the side moulding with 500 logo, chromed door mirror caps, vintage logos and chrome Spiaggina '58 logo, in elegant italic script, on the rear - the signature of the latest Fiat creation.

The interior has the same class and elegance, with original and authentic design touches. Starting from the dashboard, in the same Volare Blue colour as the exterior, to the refined two-tone look of the seats, with grey striped base and ivory upper section. The chic interior is completed by special mats and a steering wheel with vintage logo. The new Spiaggina '58 special edition offers the very best in connectivity technology and is equipped (as standard) with a UconnectTM 7" HD touchscreen radio which is Apple CarPlay ready and compatible with Android Auto, as well as navigator with Tom Tom maps. Also standard are the largest-in-class 7" TFT display, automatic A/C, rear parking sensors, height-adjustable seats and seat-back pockets. Finally, the 500 Spiaggina '58 comes with a 1.4-litre, 99hp petrol engine with the latest Euro6B rating.

The Fiat 500 collection becomes even richer and more exclusive

The 500 Spiaggina '58 special series is another addition to the Fiat 500 collection, which has included an impressive number of special editions, issued in succession over the last 11 years.

Fittingly so, since Fiat 500 has always been a trendsetter which, while remaining true to itself, has been re-interpreted over time, linking its name to iconic brands from the worlds of fashion, luxury yachts, arts and sport in truly unique editions that have explored unusual territories for a city car.

Outstanding examples include the stylish Diesel, Gucci, the amazing Riva and Abarth Rivale that evoke luxury yachts the 560 series celebrating the model's great forebearer, and finally the 500 Mirror, with top-end connectivity for the millennial lifestyle. And today it is the turn of the splendid 500 Spiaggina '58 to continue the story of the Fiat icon.

Launched in 1957 and established over the years as the icon of mass car ownership in Italy, the Fiat 500 was reborn in 2007 with the debut of the new model, which rapidly become a global phenomenon. Its success is demonstrated by the fact that over 2 million cars were sold in more than 100 countries worldwide, with over 80% of sales volumes achieved on the export market. A success that has made the 500 (including the Abarth 500) number 1 in Europe in its segment since 2013.

This status was reconfirmed during the first five months of 2018, with leadership in 10 markets (UK, Spain, Belgium, Switzerland, Portugal, Austria, Slovenia, Hungary, Bulgaria and Croatia) and a top-3 placing in 6 other countries (Italy, Germany, France, Sweden, Slovakia and Romania). The model's growth shows no sign of abating, as, reaching its eleventh year in the first five months of 2018, it once again broke its own records, with more than 93,000 cars sold in Europe, making them its best ever five sales months ever.

Heir to a symbol of La Dolce Vita

Just a year after its launch on 4 July 1957, the Fiat 500 became a real cult object with the debut of its first special series: the 500 Jolly, better known as Spiaggina, or beach buggy. Built by Carrozzeria Ghia and based on the Fiat 500, and later also on the Giardiniera version, this exclusive car was produced from 1958 to 1965 and sold in Europe, the United States and South Africa.

Costing twice the price of the normal version, this special seaside version was a favourite of the most influential personalities of the age - including shipping magnate Aristotle Onassis and actor Yul Brynner - who chose it as their preferred transport to their yachts or as a golf car on their country estates. A 500 Jolly can also be admired in the personal car collection of US President Lyndon B. Johnson.

One of its distinctive features was the absence of doors - slender chains were not introduced until around 1965 - although the most innovative aspect of its design was inclusion of chromed rails in the sides and along the top of the bodywork, supporting the sunshade-canopy. Equipped with a 22hp air-cooled two-cylinder engine, the 500 Jolly had a top speed of 105 km/h.

Fun and carefree are the feelings conveyed at first glance by the Spiaggina by Garage Italia showcar. This has been achieved thanks to its typical summer colours, Volare Blue and Perla White, which distinguish the two-tone livery of the body with Garage blue finishes and matching interior upholstery. The roof, just like the traditional Spiaggina, has been removed and the rear passenger space has been transformed into a spacious compartment so that you can take all your beach essentials with you. This modification was possible thanks to the support of Pininfarina technicians, who assisted Garage Italia staff in the design of structural reinforcement work, such as the rear roll-bar, to ensure the chassis was rigid enough.

These details make the latest creation by Lapo Elkann's creative hub truly one of a kind. The showcar has a lowered nautical windscreen and the load platform is covered with slatted cork with a pattern recalling the design of teak floor boards on luxury yachts.

The two front seats have been replaced by a tailor-made bench to reflect the typical design of 1960's cars, embellished by the blue and white Foglizzo Leather upholstery, with a special waterproof treatment. Last but not least, the chrome trim on handles, door mirrors and hubcaps on the new Fiat 500 Vintage 1957 alloy wheel rims all contribute to making the Spiaggina by Garage Italia sparkle under the sun.