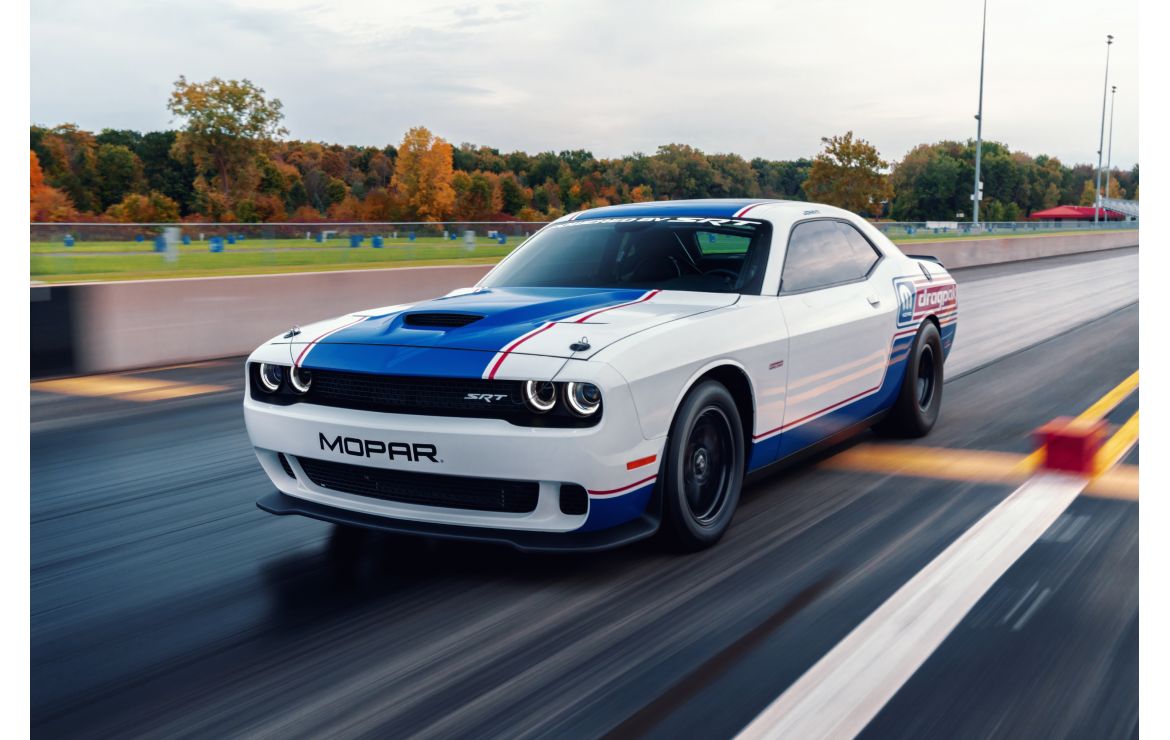 Building on lessons learned with the third-generation Drag Pak, the new fourth-generation Challenger Drag Pak offers racers the choice of buying a complete, turnkey package ready for the track or a variety of modular kits to install on their own Dodge Challenger drag car.

"Mopar and Dodge//SRT collaborated to make this factory production-based Challenger Drag Pak not only a forced to be reckoned with at the strip but also an instant collectable for Mopar enthusiasts," said Mark Bosanac, Head of Mopar Service, Parts & Customer Care, FCA - North America. "Our legacy has been won at the track by the women and men who pour all they have into being the best. This new Challenger Drag Pak gives them the tools to stay in front of the competition."

Production of the new Challenger Drag Pak will be limited to 50 serialized units. Ordering and pricing details will be announced in the future.

Heritage-inspired Graphics Signal Performance
Just as the modern Dodge Challenger turns heads with design cues that harken back to the original muscle car era of the 1970s, the red, white and blue color scheme on the fourth-generation Challenger Drag Pak displays a modern flavor, seasoned with nostalgia.

The graphics package is anchored by the blue Mopar logo and red "dragpak" badging on the quarter panels above the rear wheels. The red band wraps around the rear of the car, connecting the badges.

"We want this to look so cool that when the customer buys a Challenger Drag Pak he or she wants to run these graphics because they are so iconic and stand out," says Mark Trostle, Head of Performance, Passenger Car and Utility Vehicle Design for FCA - North America. "Mopar people are proud of the heritage and the look and they want to show that off."

Four Generations of Track Experience
Construction of the Challenger Drag Pak begins with a standard-width Dodge Challenger Body-in-White (BIW) unibody built at the FCA Brampton Assembly Plant in Brampton, Ontario. An SFI-specification welded rollcage, rated for quarter-mile runs as fast as 7.50 seconds, is integrated into the body.

New for the fourth-generation Mopar Dodge Challenger Drag Pak, the Strange rear axle assembly uses adjustable coilover shocks, four-link suspension with wishbone and an anti-roll bar. Wheelie bars and a parachute mount are integrated into the chassis and are standard.

Mopar and Dodge//SRT Package Car Heritage
The Mopar Dodge Challenger Drag Pak's roots were firmly planted in the early 1960s with the factory production of Max Wedge package cars. In 1968, 426 HEMI-powered Dodge Dart and Plymouth Barracuda package cars were unleashed on the strip. Those vehicles continue to compete in the Super Stock/Automatic-HEMI (SS/AH) class of NHRA Sportsman racing and the annual fan favorite Mopar HEMI Challenge, held during the NHRA U.S. Nationals at Lucas Oil Raceway in Indianapolis, Indiana, since 2001.

The third-generation 2015 Challenger Drag Pak saw the introduction of the first supercharged 354 HEMI as well as a naturally aspirated 426 Gen-III HEMI and was capable of 8.0-second ETs out of the box.

For more than 100 years, the Dodge brand has carried on the spirit of brothers John and Horace Dodge, who founded the brand in 1914. Their influence continues today. For 2020, Dodge literally expands its high-performance Charger model lineup, adding a Widebody exterior to America's only four-door muscle car. Powered by the 707-horsepower supercharged 6.2-liter HEMI® Hellcat V-8 engine, the 2020 Dodge Charger SRT Hellcat maintains its reign as the most powerful and fastest mass-produced sedan in the world.

The 2019 Dodge Challenger SRT Hellcat Redeye is possessed by the Demon. Its 797-horsepower supercharged HEMI® high-output engine makes it the most powerful, quickest and fastest muscle car, reaching 0-60 miles per hour (mph) in 3.4 seconds, and the fastest GT production car with a 1/4-mile elapsed time (ET) of 10.8 seconds at 131 mph. It also reaches a new top speed of 203 mph.

Challenger R/T Scat Pak 1320 with exclusive drag strip technology from the iconic Dodge Challenger SRT Demon. The Challenger R/T Scat Pack 1320 is a drag-oriented, street-legal muscle car and a blank canvas for the serious grassroots drag racer. The 2019 Dodge Durango SRT, America's fastest, most powerful and most capable three-row SUV with a best-in-class tow rating of 8,700 lbs., completes the brand's performance lineup. These visceral performance models join a 2019 brand lineup that includes the Durango, Grand Caravan, Journey, Charger and Challenger - a showroom that offers performance at every price point.

About Mopar
Mopar (a simple contraction of the words MOtor and PARts) is the service, parts and customer-care brand for FCA vehicles around the globe. Born in 1937 as the name of a line of antifreeze products, the Mopar brand has evolved over more than 80 years to represent both complete care and authentic performance for owners and enthusiasts worldwide.

Mopar made its mark in the 1960s during the muscle-car era, with Mopar Performance Parts to enhance speed and handling for both road and racing use, and expanded to include technical service and customer support. Today, the Mopar brand's global reach distributes more than 500,000 parts and accessories in over 150 markets around the world. With more than 50 parts distribution centers and 25 customer contact centers globally, Mopar integrates service, parts and customer-care operations in order to enhance customer and dealer support worldwide.

Mopar is the source for genuine parts and accessories for all FCA US LLC vehicle brands. Mopar parts are engineered together with the same teams that create factory-authorized specifications for FCA vehicles, offering a direct connection that no other aftermarket parts company can provide. Complete information on the Mopar brand is available at www.mopar.com.