The all-new 2018 Chrysler Pacifica reinvents the minivan segment with a boldly styled and sculpted exterior and a highly functional yet beautifully crafted interior. From every angle, its proportions, surfacing and styling create an appearance not expected of a vehicle in the segment. 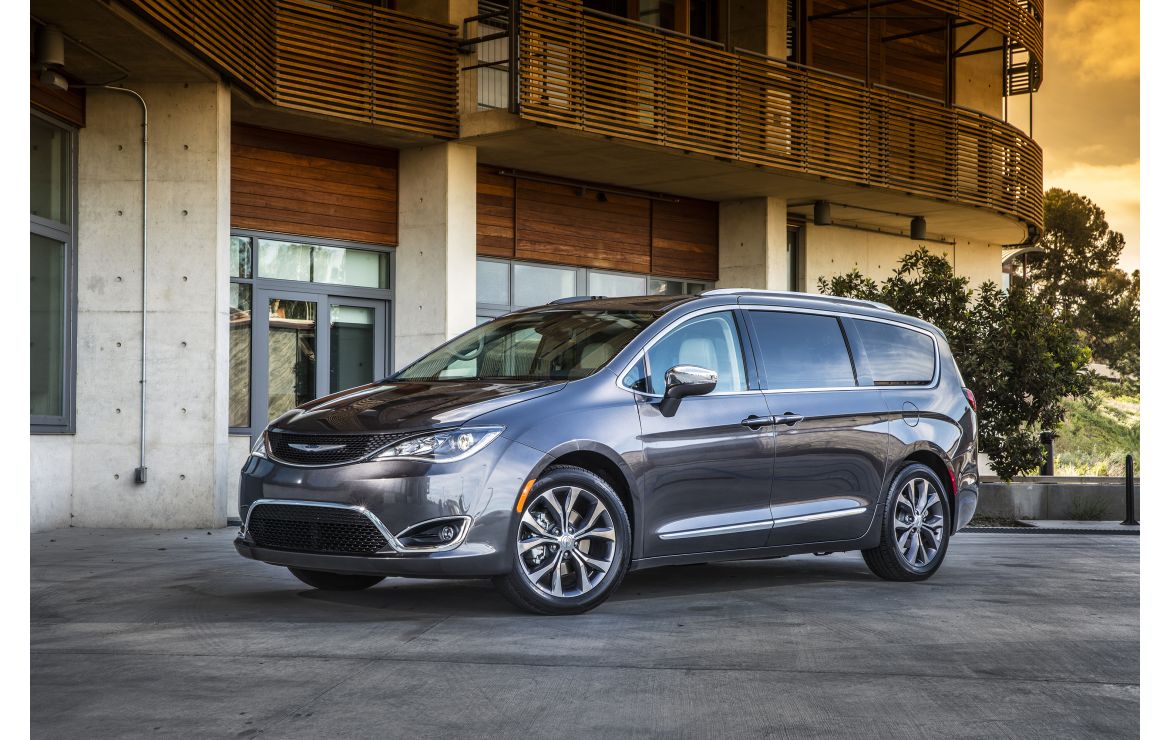 The all-new 2018 Chrysler Pacifica reinvents the minivan segment with a boldly styled and sculpted exterior and a highly functional yet beautifully crafted interior. From every angle, its proportions, surfacing and styling create an appearance not expected of a vehicle in the segment.

The Chrysler Pacifica features a sophisticated road presence, with a dynamic stance, wind-swept profile and aggressive wheel-to-body proportions. With its long wheelbase, wide track and low ground clearance, the Pacifica appears planted, with a capable stance and athletic proportions. Tailored brightwork throughout the exterior acts as a "jewel" to highlight the styling.

The Pacifica's wind-swept profile isn't a façade. The redesigned minivan boasts unsurpassed aerodynamic performance, which benefits from features like underbody aero panels, aerodynamically tuned windshield wipers and an optimized relationship between the front glass and the roof panel.

The front of the Pacifica features the contemporary face of the Chrysler brand, with a sleek, flowing upper and lower grille. The slim upper grille flows seamlessly into the headlamps, while the Chrysler wing floats within the mesh grille texture. The upper and lower grilles feature ribbon-like chrome accents that flow in concert for geometric balance and a premium appearance. A Mobius chrome strip that cradles the available LED fog lamps intertwines with the fog lamp housing and the lower grille.

A robust sculpted hood with distinctive character lines leads the eye to the upper grille and the Chrysler wing that visually floats within the mesh grille texture - the hood shingles over the upper grille for a clean, seamless appearance.

The body-side sections are highlighted by an A-line that runs gracefully from front to rear, tracing downward into the rear fascia to define the rear quarter section. The sculptural nature of the Pacifica's body section ties it to the Chrysler brand family. A lower surface character line, combined with the A-line and rear fascia surfacing, add to the Pacifica's sophisticated, fluid-like surface that plays with layers of light from every angle.

A visually stretched daylight opening defines the upper canopy and is accented by a chrome surround, which, as it travels rearward, thins and thickens as if drawn with a brush. The sliding door track lines are hidden under the rear-quarter side glass, resulting in a clean rear-quarter surface that's free of traditionally visible tracks.

From the rear, the Pacifica's dynamic and fluid appearance becomes increasingly evident, with a fast silhouette and a roof that blends into a sculpted, integrated rear spoiler at the rear-most trailing edge. The rear-swept D-pillars accentuate the faster side and roof profile, adding to the sleek dynamic visual uncommon in the minivan segment.

The rear liftgate glass is visually "tucked" into and offset from the D-pillars, with the liftgate glass integrating seamlessly into the tail lamps for a clean and unified statement.

Like the front fascia, the rear fascia delivers simplicity and sculpture, with a dramatically minimized rear bumper shelf that helps to visually unify the liftgate and rear fascia. The rear fascia features an integrated black valance panel that includes rear reflex and a bright chrome horizontal detail to visually lighten the rear of the vehicle and enhance Pacifica's wide stance.

Horizontally oriented tail lamps feature an LED "halo signature" with an even glow for a modern appearance. The tail lamps are integrated into the rear backlight and are extended outward to help emphasize the vehicle's width and wide track. An athletic spoiler adds to the minivan's lean stance and attitude, helping improve aerodynamics as well.

The all-new Pacifica is available with 17-, 18- or 20-inch wheels, which help to emphasize the Pacifica's planted stance and athletic proportions.

When designing the interior of the all-new 2018 Chrysler Pacifica, designers sought to "make every piece like a canvas that has been painted on." The interior is horizontally drawn, emphasizing the spaciousness of the vehicle, while continuous linear elements keep the eye moving.

The beautifully crafted interior of the Chrysler Pacifica mixes high-tech elements with a sculpted, muscular feel. Control elements are high-tech and modern looking, with their hard surface contrasting with the soft, sculpted look elsewhere. Outlets appear more formal, highlighted by a simple chrome ring that was designed to be thinner for an exquisite, precise feel. Bezels feature a similarly weighted accent.

Sophisticated, modern colour and material trim combinations are highlighted by unique interior accents in the doors and instrument panel. These interior environments were inspired by various locations in the United States:

Stitching throughout the interior adds to the handcrafted feel, while Piano Black accents with a premium-looking finish provide a touch of luxury and high tech. The tone-on-tone control knobs in the centre stack feature a spun finish, reminiscent of high-end audio equipment.

The advanced Uconnect touchscreen is available as either a 5-inch (127 mm) or 8.4-inch (213 mm) and is set flush with the instrument panel for a clean, technical look. With a glossy screen surface that allows for higher contrast, the touchscreen feels futuristic and in line with other modern devices, like a tablet.

In daylight, the interior is all about beauty and sculpture, with the instrument panel's defined, fluid surface at the centre of it all. On upper trim levels, a stitched instrument panel adds an even higher touch of adornment. At night, the interior evokes a different emotion with a more high-tech look, with white lighting on buttons and the cluster display glowing with "Chrysler blue." Other control elements also use blue lighting, versus the traditionally used amber, for a more cohesive and technical look.

The spacious interior delivers best-in-class front-row and third-row legroom, and an available tri-pane panoramic sunroof adds to the feeling of spaciousness. With a dual-pane panoramic sunroof over the front- and second-row seats and fixed glass pane over the third row, all Chrysler Pacifica passengers can enjoy the openness and a view to the sky above.

The HVAC controls are consolidated in the headliner, running cleanly along the rails. In the rear, the HVAC controls are on the passenger side headline - a thoughtful consideration after research showed that it was the optimal position if there is only one child in the second row or during school pickup and drop-off.

The thoughtfully crafted interior is as functional as it is beautiful. An unsurpassed amount of storage includes a large centre console, featuring spaces specifically designed to fit devices like an iPad. The bottom of the console bin is deeper than the vehicle floor for added storage space.

Other storage spaces were designed with customer needs in mind, including storage for an umbrella and sunglasses, and two bins in the rear cargo area that can each hold a gallon of milk. Even the back of the front seats adds functionality, with integrated grocery bag hooks.

The Stow 'n Go floor bins offer storage when the second-row seats are not stowed, and the enhanced Stow 'n Go system features redesigned seats for added comfort and side support. The Stow 'n Go process has been improved so that the seats fold smoothly forward into the tubs, while the addition of the available all-new Stow 'n Go Assist feature helps to further simplify the process. With the press of a button on the B-pillar, the front seat moves forward to allow the second-row seat to be stowed. Pressing the button again moves the front seat back to its starting position. In addition, the Easy Tilt second-row seats allow for easy access to the third row, even with an empty child seat installed in the second row.

The Pacifica's seating delivers even more functionality with the addition of the available eight-passenger seating. The lightweight, removable eighth-passenger seat fits in between the existing second-row seats and functions as a large second-row armrest with cupholders when not in use.

For quick cleanup, the Stow 'n Vac integrated vacuum, powered by RIDGID, is the highest-powered in-vehicle vacuum in the market, and is located in the C-pillar trim area for easy access to all corners of the vehicle.

Since its launch, the Pacifica has received a slew of prestigious awards, including being named the highest-ranking minivan in the J.D. Power 2017 U.S. Initial Quality StudySM (IQS), winning the Drivers' Choice Award for Best Minivan from MotorWeek, becoming the only minivan to earn a 2017 Top Safety Pick+ rating from the Insurance Institute for Highway Safety (IIHS) and being named in Wards 10 Best Interiors List.