Vitoldas Milius and Aidas Bubinas, driving the full electric PEUGEOT e-208, became the fastest crew in the class up to 50 kWh (battery capacity) in the electric car competition Ignitis ON: get to know Lithuania. The precise work of the crew and efficient car allowed to achieve a great result and confidently win the first place in the traditional electric car competition in Lithuania, which was held for 6th time in a row. 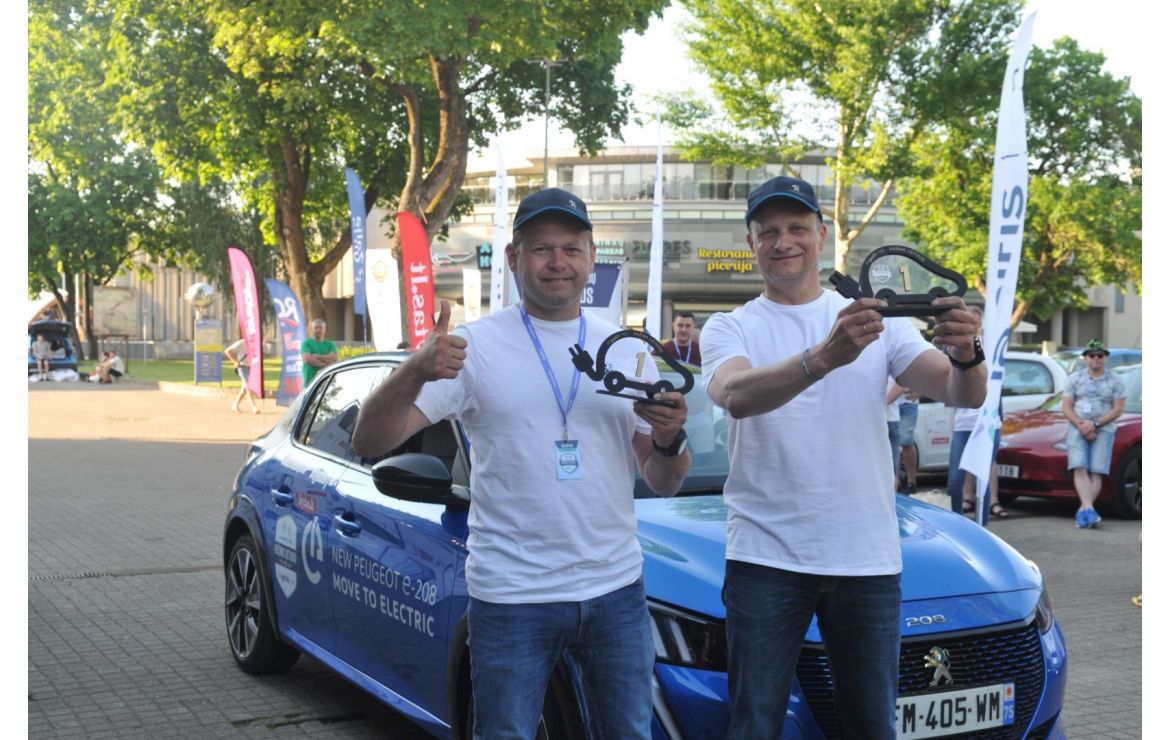 In the electric car competition, 22 vehicles were divided into two groups according to their battery capacity: those with a capacity of up to 50 kWh and the cars with more than 50 kWh capacity. Competitors in lower capacity group had to cover a distance of 300 km without charging and > 50 kWh group at least 500 km. Porsche Taycan won among the more powerful and much more expensive models, while Peugeot e-208 won in the group of up to 50 kWh.

Before the start, each competing crew was given a list with various places of interest in Lithuania. Each team formed their own route, which had to pass through at least 3 places of interest. Peugeot e-208 team and competitors from the same class had to drive at least 300 km route from Vilnius to Druskininkai.
Vitoldas Milius and Aidas Bubinas calculated the distance perfectly: they included two points of interest near Ukmerge, one in Druskininkai and arrived at the finish with a driving range of 305 km.
“As we planned, the car was able to cover 300 km without additional charging. We chose to drive rather economically and selected the points of interest accordingly, without driving far from main roads,” said V. Milius.
The crew covered almost the entire distance of 305 km at the maximum permitted speed, the only exception was Vilnius-Ukmerge motorway where the top speed was 100 km/h (official speed limit on the road is 130 km/h). This stretch was the very first on the entire 305 km journey, so Milius and Bubinas did not want to risk using too much battery power too soon and they chose optimal speed and energy consumption – successfully. The various solutions applied to the trip paid off. Peugeot e-208 drove 305 km in 3 hours 59 minutes, overtaking the second place by 4 minutes.

The competition is close to the real drive

Peugeot e-208 used an average of 13.6 kWh/100 km during the competition. This is almost identical to the WLTP test results: 13.3 kWh/100 km.
Most of the 305 kilometers were rural roads, almost a quarter of the route was a motorway and driving in cities was minimal. The advantages of an electric car are revealed precisely when driving in urban conditions, so the result of average energy consumption achieved by V. Milius and A. Bubinas is very close to everyday usage. The average speed of the total trip was 76 km/h and drivers’ calculations were impressively accurate – when the crew arrived to the finish, the car's computer showed 5 km of remaining electric range.
Peugeot crew chose to drive slower and go through the route without charging stops and the tactic proved to be right in this race. On daily trips, it is often worth driving faster and stopping for a short and quick charge. The e-208 battery is heated and cooled and has a maximum charging capacity of 100 kW, allowing it to be recharged in just a few minutes for an additional hundred kilometers.