Safety for All: Opel Crossland X “120 Years” Continues the Tradition 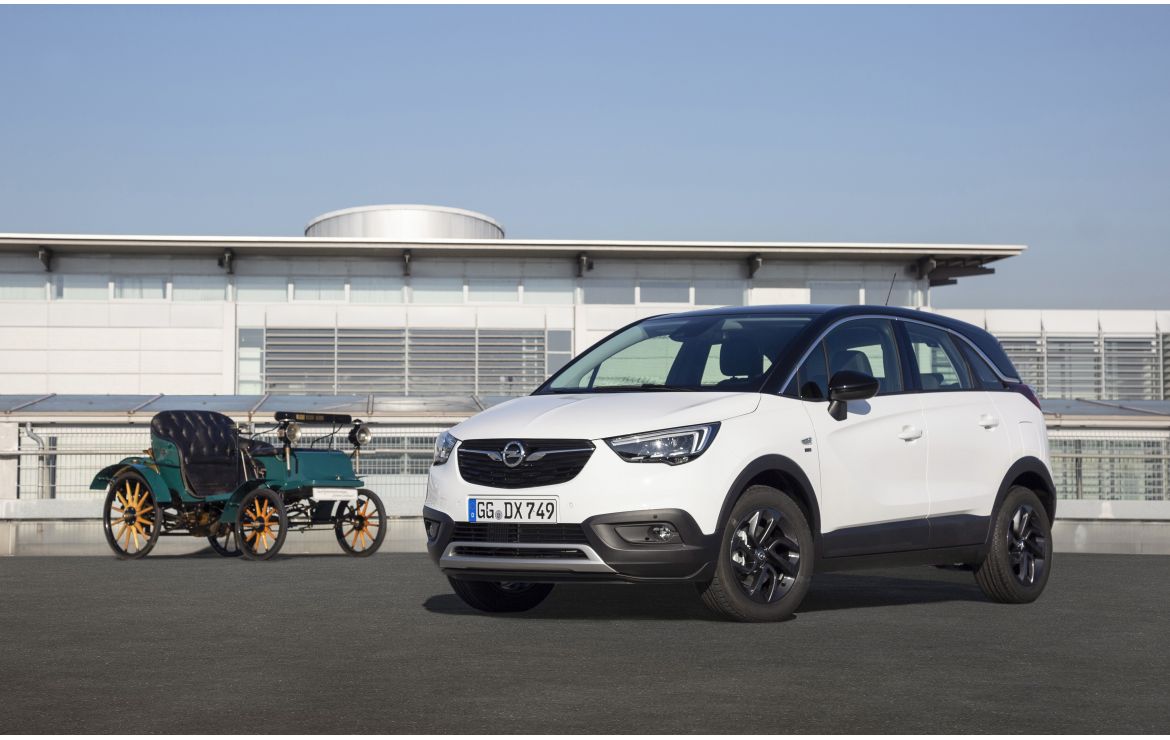 Rüsselsheim. Opel has been building cars since 1899, when the first “Patentmotorwagen System Lutzmann” chugged out of the assembly shop. In 2019, Opel celebrates 120 years of automobile production and thereby 120 years of innovations. The German brand has a long tradition of making the highest safety standards accessible to all. Advanced chassis technologies and restraint systems have always played a prominent role – for example in the four-wheel brake system of the Opel 10 PS, the self-supporting, monocoque body of the Olympia, the full-size airbags of the Corsa B and the smart traffic sign recognition of the Insignia A.

An excellent example of safety for all today is the Opel Crossland X. Like its predecessors, the Crossland X also offers advanced safety technologies in the SUV B segment that make it stand out in the marketplace. In Opel’s anniversary year, the “120 Years” model variant additionally features as standard a ThermaTec heated windscreen for a clear view on frosty days; LED ambient lighting in the centre console and the doors for a feel-good atmosphere in the dark; and on the outside, high-gloss black B pillars, a chrome roofline, a silver underride front and rear with protective-looks, plus anthracite-coloured light-alloy wheels in 4 x twin-spoke design. Thanks to its wide range of high-tech driver assistance systems, the small, cool SUV offers outstanding innovations that make every journey safer, easier and more comfortable.

Forward Collision Alert with Pedestrian Detection and Automatic Emergency Braking monitors the traffic situation in front of the Crossland X via the front camera and is able to detect driving and parked cars as well as pedestrians (adults and children). The system sounds an alarm and gives a visual warning, and also brakes automatically if the distance to a vehicle or a pedestrian ahead decreases rapidly and the driver does not react.

Drowsiness Detection is an extension to the Driver Drowsiness Alert fitted as standard, which alerts the driver after two hours of driving at more than 65 km/h. The extended system triggers a warning if the trajectory of the Crossland X suggests driver drowsiness or inattention, posting a message in the driver information cluster and giving an acoustic signal. After three warnings at the first level the system issues a second alert with a different message in the driver instrument cluster and a louder acoustic signal. The system is reset by driving at speeds below 65 km/h for 15 consecutive minutes.

The Crossland X demonstrates again that offering the customer more than they expected is a core Opel brand characteristic. The foundations were laid at the end of the 19th century by the Opel “Patentmotorwagen System Lutzmann”. Among other technology highlights, such as optional pneumatic tyres and a 4hp one-cylinder engine, the car also featured chain-driven steering. According to an Imperial Patent from April 1894, the system ensured “much smoother operation and precision” in comparison to existing designs.

In 1925, Opel further strengthened its growing reputation for high-tech at modest prices with the 10 PS, which the catalogue at the time described as “The most fairly priced car that can be offered to German buyers”. The 10 PS also aimed to match the benefits of much-admired foreign rivals – with talents such as “a silent, astonishingly smooth ride, marvellous acceleration” and “bullet-proof cornering”. The “German Series Precision Car” increased safety still further by “coming to a stop in a few metres”, thanks to its innovative brakes that operated on all four wheels. As of 1926, Opel offered the system in the little 4 PS model, too.

The next safety-for-all milestone “made in Rüsselsheim” was the 1935 Opel Olympia, the first German series-production car with an all-steel monocoque body. At the time, the proponents of the conventional frame body claimed that the self-supporting monocoque or unitary body would fall apart on the road. But the Olympia proved itself an extremely robust and safe car with high flexural and torsional rigidity. In order to further inform the public, Opel even displayed a cut-away model of the Olympia’s body at the 1937 International Motor Show in Berlin. Car buyers were convinced. By 1940 around 170,000 units of the Olympia had been produced at the Rüsselsheim plant and the innovative monocoque established itself as the body concept for automobiles (which it remains to this day).

The Opel Rekord C, which made its debut in 1967, was packed with innovations. For example, it was the first Opel passenger car with coil springs on the rear axle and it set standards in its class with disc brakes at the front and a brake booster. But the Rekord C also recognized that, in terms of passive safety, the driver sitting behind the steering wheel needed extra protection. In a frontal impact in those days, a conventional rigid steering column might be pushed towards the car’s interior. It could then come dangerously close to the driver when they were propelled forward by the force of impact and actually needed more – not less – space to avoid injury. Opel’s designers and engineers therefore developed the Opel Safety Steering System, a collapsible, telescoping steering column introduced as standard as of 1968, that reduced as far as possible the risk of injury to the driver’s head and chest.

Opel continued to improve passive safety, beginning the installation of seatbelts as standard in all cars in 1973. As the wearing of seatbelts became compulsory and increasing numbers of drivers and passengers buckled up in their vehicles, the auto industry was already developing restraint systems supplementary to the seatbelt. On the Astra F in 1991, for example, Opel installed seatbelt tensioners which could tighten the seatbelt by up to 16cm within milliseconds to secure the occupant in the seat. The risk of injury for the occupants declined further still in 1993 with the double-premiere on the second-generation Corsa B of dual protective beams in the doors and the full-size driver airbag. Opel followed this up in model year 1995 by becoming the first German automobile manufacturer to offer full-size airbags for driver and front-passenger as standard equipment on all new cars.

Higher safety for a wide range of customers in the midsize market segment was one of Opel’s objectives with the Insignia A, which made its world premiere at the British International Motor Show in 2008. The pioneering design of the flagship model underlined Opel’s ambition to set new standards in the midsize segment. The numerous innovative technologies on-board include the Opel Eye, a camera that helps the driver in two ways: “Traffic Sign Recognition” of the second generation can read speed and no-overtaking signs. The recognized sign is displayed as a symbol in the instrument cluster. “Lane Departure Warning” warns the driver when they leave the driving lane unintentionally. These two integrated systems make driving safer, reducing stress and even helping the driver to avoid fines.