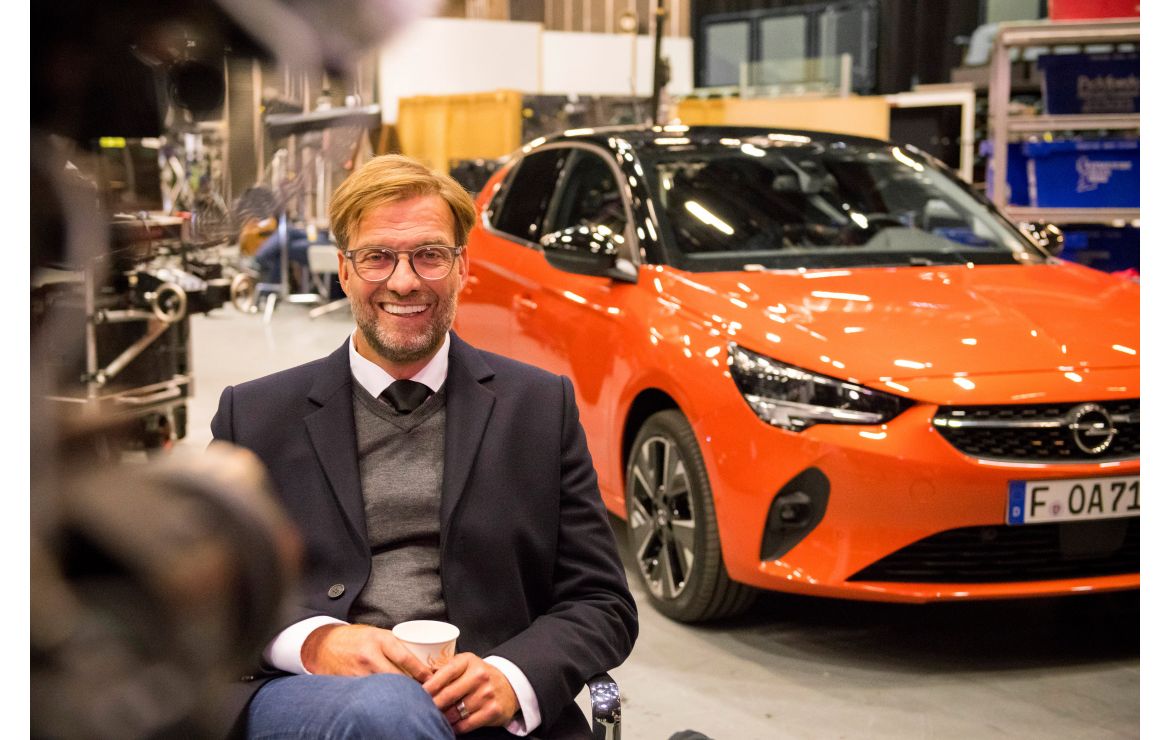 Rüsselsheim.  The new Opel Corsa and Corsa-e were already the centre of attraction at this year’s IAA Frankfurt International Motor Show. Now they are taking to the road with Opel brand ambassador Jürgen Klopp. Because while it’s fun to talk about the benefits of pioneering technology, such as electric mobility, it’s even more fun to experience it for yourself, i.e. by driving the new Corsa. And who could get that message across better than the successful football coach, who puts the German brand’s e-mobility promise to the test in the new TV ads going on-air now?

Charismatic, likeable and entertaining, Jürgen Klopp has shaped the Opel brand image already for seven years. He has played a major role in more than 20 German and international Opel TV campaigns. He has also performed as motivator for employees and dealers, and as interview partner at events. The carmaker and the 2019 Champions League winner are now extending their collaboration for the long term.

“The new Corsa is the most future-ready German small car”, says Marketing Director Tobias Gubitz. “It’s packed with leading technology, highlighted by the fully-electric
Corsa-e. But it is also simply a lot of fun to drive. That’s the clear message.”

New Opel Corsa and Corsa-e: get in and enjoy the fun

In the storyline of the campaign – which starts with the Corsa-e – everyone is talking about e-mobility, the future of the automobile and lower emissions1. But that’s not enough for Jürgen Klopp. Talk is all very well, but having fun behind the wheel is more important. And you can see how much the Liverpool coach enjoys driving the Corsa-e in the new TV commercials.

“I definitely belong to the target customers for the Corsa-e”, says Jürgen Klopp.” The electric Corsa is ideal for his daily commutes from home to training, the Anfield stadium or the airport. “A great car in every way – Opel has done a really good job.” With its 50kWh battery, the 100kW (136hp) five-door can cover up to 330 kilometres on a single charge of the battery (WLTP2). For Klopp, that means he only needs to charge the battery once a week.

The Corsa-e TV ads make the start, but more clips about the Corsa with lively and efficient combustion engines soon follow – after all, every variant is full of high-tech, regardless of the power unit. Just like the new Corsa, the highly entertaining spots also break new ground with their sophisticated CGI and filming techniques. The 360-degree campaign, which promotes responsibility as well as fun behind the wheel, is executed by the agency “Velocity McCann” from Frankfurt, Germany.

“Behind the scenes” clips additionally show how much fun Jürgen Klopp and the crew had during filming. The TV ads are complemented by outdoor advertising and social media posts about the new Corsa, which makes its German dealer-debut (with efficient combustion engines) on November 16.

Opel electrification offensive: e-variants of all models by 2024

All Opel Corsa model variants, with conventional engines or electric motor, are available to order since the summer. The same goes for the Grandland X plug-in hybrid. The top model variant is the star of another recent, unconventional campaign that highlights the many possibilities of e-mobility.

The Corsa-e and the all-wheel drive Grandland X Hybrid4 (fuel consumption WLTP3: 1.4-1.3 l/100 km, 32-29 g/km CO2; NEDC4: 1.6-1.5 l/100 km, 36-34 g/km CO2; weighted, combined) get the Opel electrification offensive underway. All Opel models will be electrified by 2024. Electrified light commercial vehicles will be especially important for the “last mile” in urban areas. The Vivaro-e van will appear in the course of next year. Electrified versions of the Opel Combo Life, Combo Cargo and Zafira Life will follow in 2021.

[1] The Opel Corsa-e offers pure electric driving and local emissions-free driving, but CO2 is produced during manufacture and power generation.

[3] Fuel consumption and CO2-emission data have been determined according to WLTP test procedure methodology (R (EC) No. 715/2007, R (EU) No. 2017/1151). EG type approval and Certificate of Conformity are not yet available. The preliminary values might differ from official final type approval data.

[4] Fuel consumption and CO2-emission data given have been determined according to WLTP test procedure methodology, and the relevant values are translated back into NEDC to allow the comparability with other vehicles, according to regulations R (EC) No. 715/2007, R (EU) No. 2017/1153 and R (EU) No. 2017/1151. EG type approval and Certificate of Conformity are not yet available. The preliminary values might differ from official final type approval data.