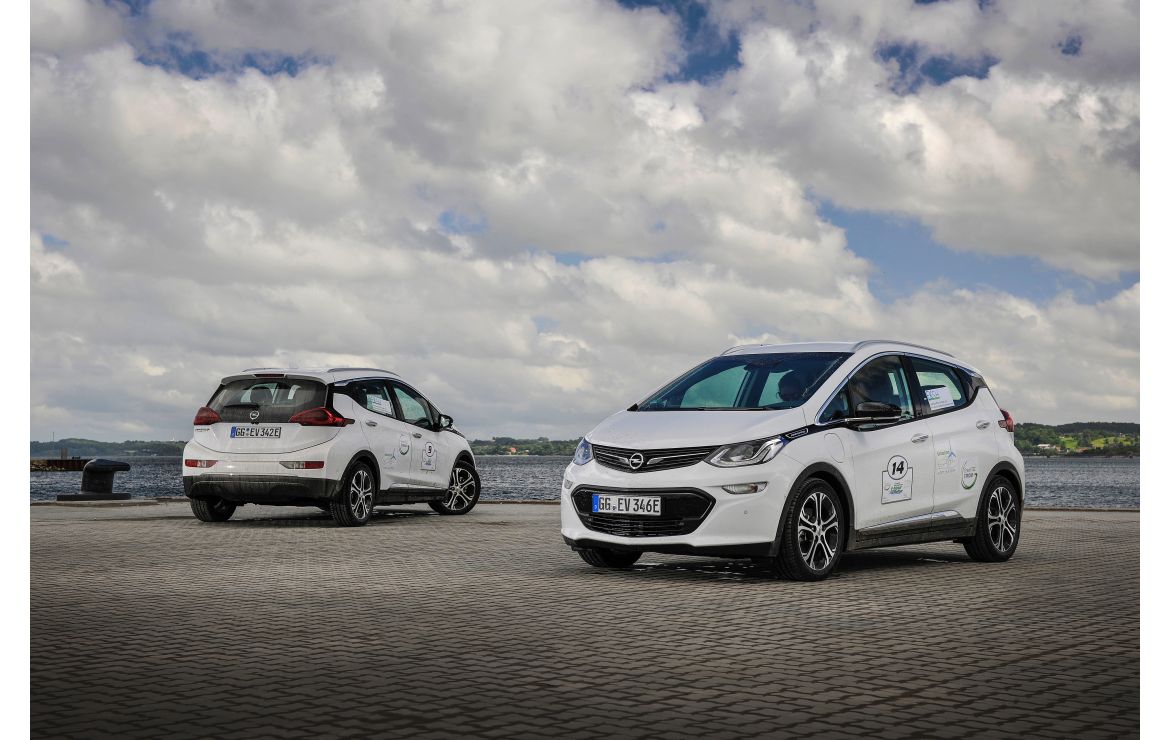 Rüsselsheim.  The Opel Ampera-e is in rally fever. After Opel’s revolutionary electric car already successfully took part in the i-Mobility Rallye in southern Germany in the spring, last weekend it participated in the 8th North European E-Mobile Rally, one of the largest events of this kind in northern Europe. With impressive results: the two registered Opel Ampera-e teams finished 3rd and 9th in the “touristic” category. One of the electric vehicles was driven by film star Benjamin Sadler. From the coast it now heads to the mountains: the innovative electric all-rounder will also demonstrate its everyday suitability in high alpine terrain on July 6-7 at the next rally. That is when the electrifying part of the Silvretta Classic for vintage cars, the Silvretta E-Auto Rallye, takes place in Austria.

The new Opel Ampera-e did not have to cover 520 kilometers at the cross-national 8th North European E-Mobile Rally over the weekend, which it covers on one battery charge according to the New European Driving Cycle (NEDC). But Opel’s groundbreaking e-mobile easily mastered around 270 kilometers of electric driving fun from Schleswig-Holstein to Denmark and back. A total of 37 participating cars, two of which were Ampera-e vehicles, were put to the test at the electric vehicle competition organized by the ECO-Mobility e.V. association. It started off on Saturday at the GreenTEC campus in Enge Sande, around 30 kilometers west of Flensburg, Germany. The route crossed the Danish border to Schloss Schackenborg and continued to the Port of Aabenraa on the Baltic Sea for a (possible) charging stop. From there it headed back to Schleswig-Holstein and the day’s destination of Flensburg. On Sunday Flensburg, Goldelund and Enge Sande were the stages on the schedule.

The electric rally was not about driving as fast as possible and crossing the finish line ahead of all other participants. Instead, the two-man teams faced challenging tasks and time trials – because the 8th North European E-Mobile Rally was designed as a regularity and endurance race, and depending on participants’ qualifications was divided into “sporty” and “touristic” categories. Instead of high speeds, cleverness, energy-conscious driving and teamwork were decisive. Vehicles and driver/co-driver crews were able to show what driving with alternative propulsion means here – and how much fun this is with the Ampera‑e.

“It was the first time that I got to drive the Ampera-e and I was absolutely thrilled,” said Benjamin Sadler. “We could have easily completed the course without recharging and that really won me over.”

The next regularity (or TSD, time-speed-distance) rally for electric vehicles, the Silvretta E-Auto Rallye, coincides with the famous vintage car rally Silvretta Classic. The Opel Ampera-e is also in the field here in Montafon, Austria. So on July 6-7, it is “Classic meets Future” for the e-car. Parallel to the Silvretta Classic, the electric vehicles cover a total of more than 260 kilometers with many time and skill tests over two days. From Schruns over the Silvretta High Alpine Road, Bludenz and Lech, the route crosses various Alpine passes in Vorarlberg and Tirol. From around 600 meters above sea level, it repeatedly reaches altitudes of over 2,000 meters – here the Ampera-e can show how steadfastly it also masters these challenges.

With 520 kilometers according to the New European Driving Cycle (NEDC), the Opel electric car offers an unchallenged higher range than the closest competitor in the segment. Also approximated to the speed profile (shorter test procedure) defined by the WLTP (Worldwide Harmonized Light-Duty Vehicles Test Procedure) driving cycle, the Ampera-e is convincing. Based on this development test, engineers estimate combined WLTP range at 380 kilometers – dependent on personal driving style and external factors. And if higher speed and power is called for during the mountain-and-valley rally, the Ampera-e’s 150 kW/204 hp electric motor ensures impressive acceleration and elasticity with its maximum instant torque of 360 Nm. This takes the electrically-powered five-seater from zero to 50 km/h in a sportscar-like 3.2 seconds; mid-range acceleration during overtaking from 80 to 120 km/h is covered in just 4.5 seconds.