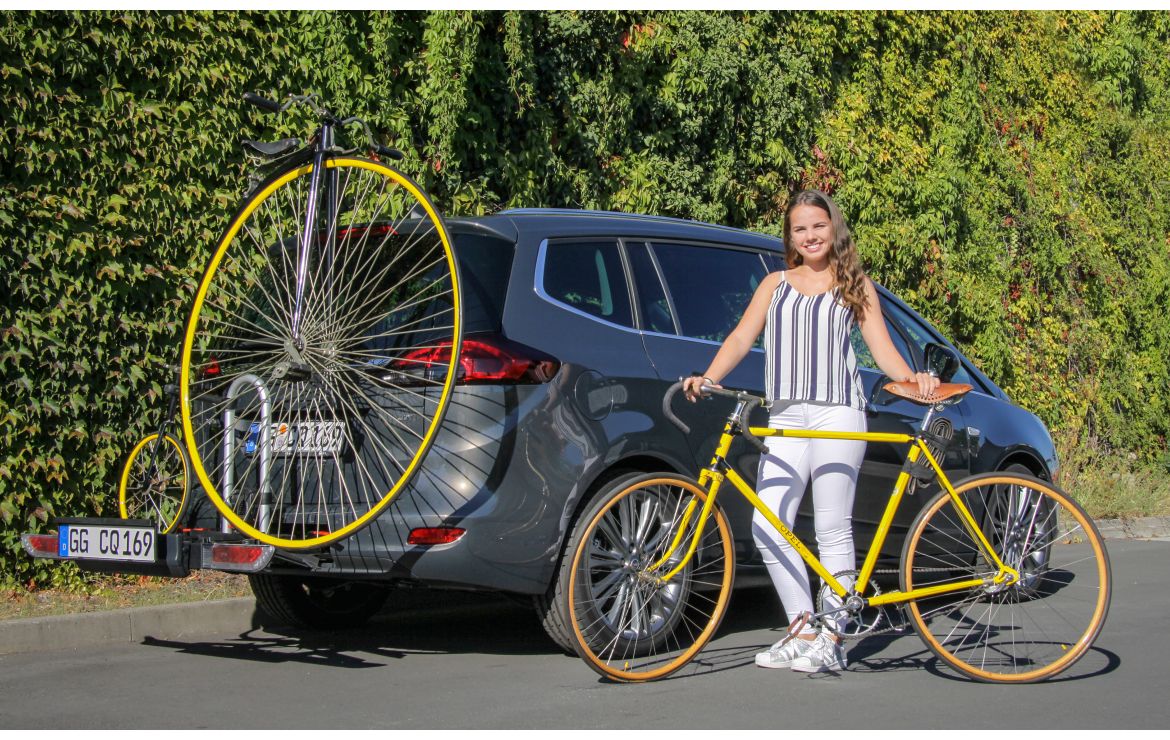 Rüsselsheim.  It’s a special birthday for the bicycle: this year Opel celebrates the 130-year anniversary of its bicycle production, which played a key role in the rise of the brand during the company’s early days. After building the first penny farthing, or high-wheel bicycle, in the spring of 1886, Opel rose to become the world’s largest bicycle manufacturer in the 1920s. Even the looming economic crisis of 1929 could not stop the successful bicycle business. Nevertheless, Opel sold this business unit to the German bicycle and car manufacturer NSU in December 1936 to fully turn its attention to the production of automobiles.

It took around 75 years for Opel to return back to its bicycle roots – at least a little. With the RAD e, the Rüsselsheim manufacturer introduced an environmentally friendly design study in 2012 that built a bridge from past tradition to the present. The electrically-driven bicycle was simultaneously a vision of the bicycle of the future. Because in the era of urbanization and alternative mobility, e-bikes are expected to play an increasingly important role in future concepts.

23 years after founding the company – until then Opel had produced only sewing machines – Adam Opel returned from a business trip to Paris in 1885. Before his trip to the French capital, he considered high-wheel bicycles “a newfangled gadget. A fad that will disappear as quickly as it came.” After his Paris visit, that statement was quickly all water under the bridge. Inspired by the flourishing trade with high-wheel bicycles there and influenced by the bicycle boom in England, Opel had an idea. He had single parts delivered from England and to the delight of his sons, began building the first high-wheel bicycle. In 1886 Opel sold the first bike – and bicycle production at the company started.

Just one year later Opel began producing tricycles and low-wheel bicycles, so-called safety bicycles. His son Karl had brought such a safety bike back from a study trip on bicycle production he had taken to Sheffield, England. The safety had two wheels nearly identical in size and was considerably easier to ride than the high-wheel bicycle, and of course the fall height was much lower. Fascinated by the crowds at English bicycle racing events, after his return Karl joined the field at a race in the Palmengarten in Frankfurt – and promptly won.

Now everything happened quickly. From his first victory in Frankfurt, Karl brought home five orders for bicycles, and many more race victories resulted in more new orders. In 1889 alone, there were 240 racing victories, including 13 championships, won with Opel bicycles. July 20, 1889 was to become a milestone for the national recognition of Opel bicycles. On this day, August Lehr, one of the most successful bicycle racers of the time, won the “Championship of the World” in London on his Opel high-wheel bicycle – a victory that weakened English influence on the bicycle industry while providing tailwind for Opel bicycles. The originality and entrepreneurship of the Opel brothers is captured in a photo from 1895 showing them all on a special model with five seats – the quintuplet.

The following years were also successful. In 1899 the Opel sons – father Adam had died in 1895 – built the first automobile, but they kept pushing ahead with the bicycle business. Until the 1920s, they regularly engaged the world’s best bicycle racers who pedaled from one victory to the next on Opel bikes. And because demand for the two-wheelers continued increasing, Opel soon made a fundamental change to its production: in 1923 it was the first German company to introduce assembly line production for its bicycle manufacturing. Now, every seven seconds a new bike rolled off the assembly line. The falling production costs also reduced the purchase price for customers, making the bicycle an affordable means of transportation for much of the population. So it didn’t take long until Opel became the largest bicycle manufacturer in the world in 1925, and one year later the one-millionth Opel bicycle rolled off the assembly line.

Re-thinking in the 1930s: Opel sells its bicycle business to NSU

But in the following years, the up-and-coming company had to cope with some setbacks. After the death of Opel sons Karl and Heinrich in 1927 and 1928, brothers Wilhelm and Fritz faced financial woes due to the double inheritance tax they now had to pay. When they didn’t have the money for the renovation of the production facility, which had always run at full capacity, Wilhelm and Fritz Opel looked around for a buyer. So a takeover offer from General Motors, the world’s largest automaker, came at exactly the right moment. In September 1929 I.J. Reuter became the first American named General Director of Opel, while brothers Wilhelm and Fritz Opel were appointed members of the supervisory board.

Just one month later, on October 29, 1929, the sale proved to be an extremely wise decision. The Wall Street Crash, also known as Black Tuesday, sent countless companies into bankruptcy. But the years-long economic crisis couldn’t harm the flourishing Opel bicycle production for a number of reasons: firstly, the GM subsidiary went into the crisis well-equipped; secondly, after the economic crisis there was higher demand for bicycles; and thirdly, the number of unemployed sank due to employment-creation measures, so more and more people were able to afford a bicycle.

But the manufacturers had all long set their sights on automobile production: “In order to free up all available staff for motorization, to which we want to dedicate all our energy,” explained the company management, the management and supervisory boards of Adam Opel AG decided to sell the bicycle business to NSU in late 1936. On February 15, 1937, the last Opel bicycle was produced, ending a tradition going back more than 50 years with around 2.6 million bicycles built.

Almost exactly 75 years later, Opel returned to its roots. The environmentally-friendly design study RAD e made its premiere in March 2012 at the Geneva Motor Show. In the year of the brand’s 150th anniversary, the engineers were inspired by a historic vehicle, the Opel motorcycle Motoclub 500 from 1928. Just like the classic machine, whose popularity is also due to its blazing red tires, the RAD e frame is made of pressed-steel elements. Design elements from two Opel passenger cars are also found in the bicycle study’s design language: the boomerang-shaped frame form is very similar to the front design of the Ampera and Zafira Tourer.

From the first high-wheel bike to the RAD e concept: Opel’s bicycle tradition has come a long way since 1886. During this time, not only the vehicles, but also society’s needs have changed: because more and more people live in cities today, having as many diverse mobility options as possible is an integral part of the future. That is why a manufacturer like Opel is permanently in a state of change. With the carsharing community CarUnity, the ridesharing platform flinc and the first steps towards autonomous driving, Opel is constantly expanding its classic portfolio on the way to becoming a mobility provider.

Opel CEO Dr. Karl-Thomas Neumann is a real bicycle enthusiast. Recently he met with editors of the new trade magazine Bike Bild for its first issue on the Feldberg in the Taunus hills to pedal away with the journalists for a cool story. The result is in the new Bike Bild available in Germany since August 31.