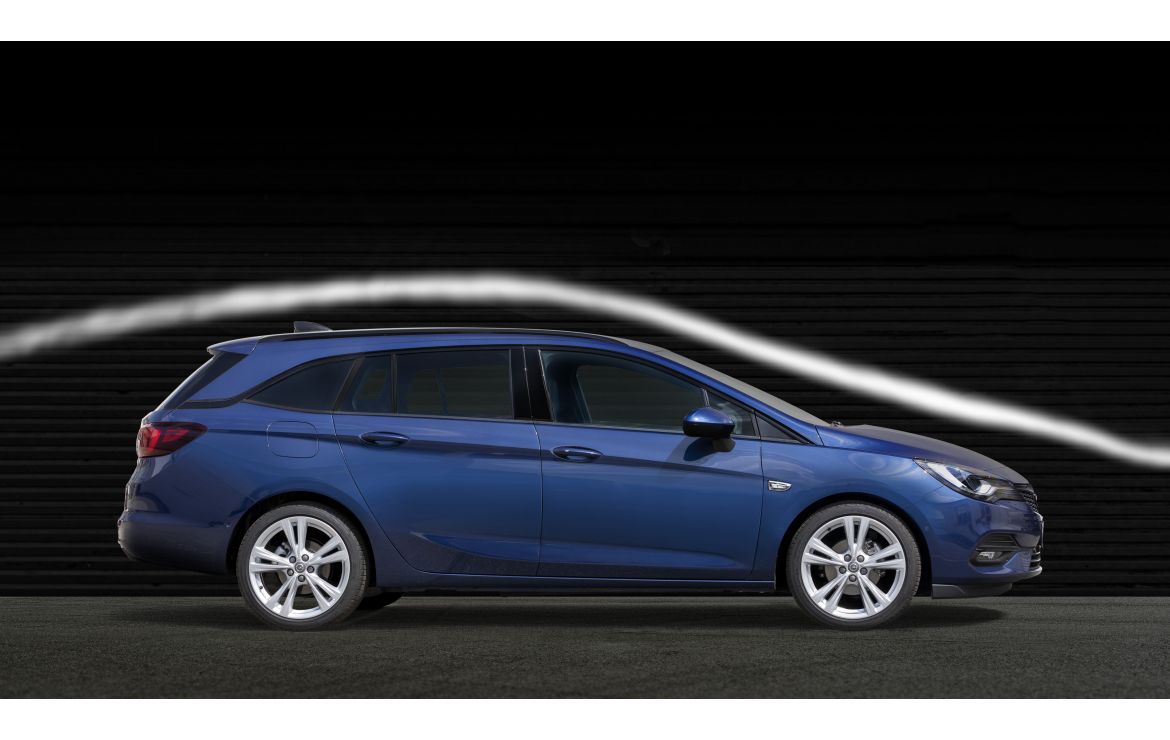 Rüsselsheim.  The new Opel Astra, which will make its world premiere at the IAA Frankfurt International Motor Show (public days September 12-22), has joined the legendary Opel Calibra and the Insignia as the most aerodynamic automobiles the German carmaker has ever produced. With a drag coefficient of 0.26 for the Astra hatchback as well as the Sports Tourer estate, the new compact Opel belongs to the most aerodynamic cars in its class. Drag has a major influence on fuel consumption. Aerodynamic efficiency is therefore key to reducing CO2 emissions.

As the king of aerodynamics, the Opel Calibra has worn the crown for almost 30 years. With a drag factor of 0.26 Cd, the sleek coupé makes no secret of its wind-cheating talents; but the new Astra’s equally low drag has been reached by the optimization of details that are less obvious to the naked eye. The current model, which made its world premiere at the IAA in 2015 and was elected European Car Of The Year the following year, already has a low drag coefficient of 0.29. When it came to the development of the new Astra, the engineers in Rüsselsheim refused to rest on their laurels. Instead they gave themselves an ambitious new goal – class-leading aerodynamics for both the hatchback and the Sports Tourer estate versions of the compact bestseller.

Using the Stuttgart University wind tunnel operated by the Research Institute of Automotive Engineering and Vehicle Engines, the development team concentrated on optimising the current Astra’s already excellent aerodynamics for the new model.

An automobile produces 40 to 50 per cent of its total aerodynamic drag in and around the underbody, the wheels and the wheel arches. The Opel engineers therefore focussed much of their attention on these areas. They also formed a special cross-functional task force to develop a new full-face active shutter.

The new Astra’s full-face active shutter further improves fuel efficiency by closing the top as well as the bottom of the grille. By combining thermal, electrical and aerodynamic considerations, intelligent control strategies for opening and closing the upper and lower portions of the grille – even independently from each other – can enable highly efficient driving under a variety of real-life conditions. For example, a ten per cent cut in drag results in a fuel consumption reduction of around two per cent in the New European Driving Cycle (NEDC), or up to five per cent when driving at 130 km/h.

The reduction in drag achieved by the full-face active shutter alone lowers CO2 emissions of the new Astra by up to 2.0 g/km.

The full-face shutter also delivers thermal advantages by delaying cooling down after switching off the engine, or by accelerating the engine warm-up after a cold start, which especially in winter provides significant benefits in fuel consumption and cabin heating comfort.

Despite the apparent simplicity and logic of the solution, the full-face active shutter represents a significant challenge for designers and engineers: they need to consider numerous factors, including not only styling, packaging, and pedestrian protection, but also insurance ratings, engine and transmission types, their corresponding thermal management and, of course, cooling requirements.

The underbody airflow-improvements include a cover under the engine and transmission, panels at the front of the floor, an enlarged fuel tank heat-shield that doubles as an air deflector, ride-height lowered by up to 10mm, depending on the model variant, and aerodynamically shaped control arms at the rear axle.

In total, the aerodynamic optimization of the new Astra saves 4.5g of CO2 per kilometre in the WLTP cycle. In the context of increasingly strict CO2 standards, this is a hugely important saving: as of 2021, an average CO2 emissions target of 95 grams CO2 per kilometre for the new car fleet will apply in the European Union1.

The new Astra makes its world premiere at the IAA exactly thirty years after the Calibra. Following the start of production in 1990, the two-door coupé from Rüsselsheim ruled for ten years as the most aerodynamic production car in the world, with a drag coefficient of only 0.26. The Calibra owed its reign to its long, low profile and a host of aerodynamic tweaks, such as optimum height of the front spoiler and the inward tapering of the rear end. Rocker mouldings between the front and rear wheels further reduced drag by preventing the air flowing underneath the car from spilling outward.

The Opel Calibra was the most successful sports coupé of the 1990s, more than 238,600 units were produced between 1989 and 1997. The Calibra was available with a total of five power outputs, ranging from the 85kW (115hp) 2.0-litre to the 150kW (204hp) turbo. The highlight of the Calibra’s career in motor sport was victory in the 1996 International Touring Car championship.