Close your eyes and allow your imagination to envisage what the car of your dreams might look like in 2035. Use your senses to picture how new forms, new materials and new technologies might combine to produce a vehicle that will epitomise luxury on four wheels in the future. This is the stimulating assignment the men and women at DS Automobiles were given – to imagine a dream car looking forward to 2035. The fruit of their collective fantasy is DS X E-TENSE, a car of incomparable refinement. 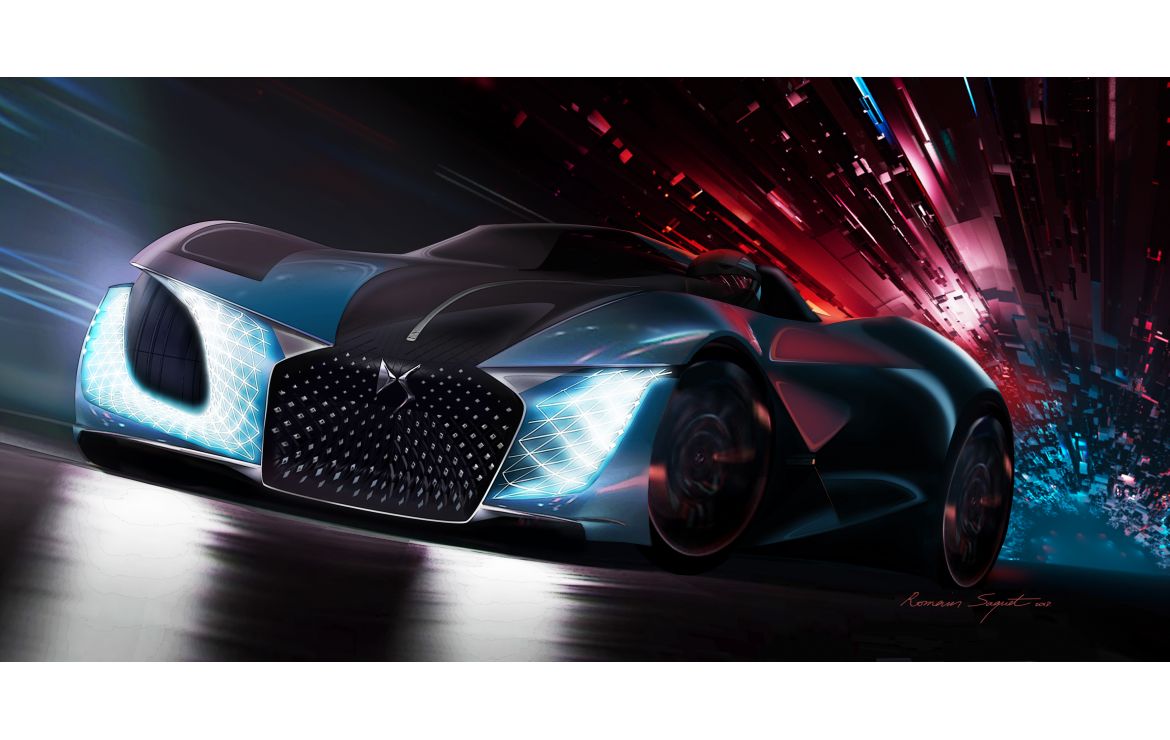 A gauntlet thrown down to futurism

In addition to the reputation it has forged for being an automobile brand capable of turning avant-garde ideas into reality, DS Automobiles has emerged as an ambassador for French savoir-faire.

Recently, DS Automobiles, the perfect combination of refinement and technology decided to rise to a singular challenge – that of exercising its world-renowned expertise and culture to imagine an object of desire.

In today’s fast-morphing automobile industry, the men and women at DS Automobiles were tasked with bringing to life their dreams for the car of tomorrow while sharing their passion of automobile, uncurbed by predetermined constraints.

The fruit of that passionate, unfettered journey is DS X E-TENSE.

Their vision for 2035 is very different from the current, near-obsessional quest for characterless mobility. Instead, the designers at DS sought to blend the benefits of advanced technology with a large measure of poetic creativity. Their answer explores how customers who have no qualms about indulging themselves and how they might perceive the notion of a luxurious French style eighteen years hence, however diverse their needs.

The result is a breathtakingly beautiful car, but also sensuous and inspiring, in the same revolutionary mould as the orginal DS which caught the motoring public’s imagination off-guard eight decades upstream of 2035.

The cockpit is accessed by an Elytre door that is trimmed with a carbon fibre/leather weave. Inevitably, the eyes are drawn to the pyramidal architecture of the single seat, which adapts perfectly to the driver’s build like the fitted seats seen in motor racing, while its reclined position helps to keep the car’s centre of gravity low. The steering wheel, meanwhile, in keeping with the symbol it has always represented vis-à-vis the passion for automobiles, is an enticing combination of leather, wood and metal, and incorporates capacitive senses to monitor the driver’s efforts. The two-tone Millennium Blue and Navy Blue Aniline leather is finished with DS’s trademark pearl top-stitch pattern. At least as emblematic as the steering wheel, the pedals have also been the object of the designers’ obsessive attention-to-detail. These appointments alone contribute to the promise of a unique experience once installed inside the cockpit and provide the driver with an adrenalin rush even before they pull away.

DS X E-TENSE’s asymmetric architecture provides distinct ambiences left and right. Climb into the cocoon part of the interior via the gullwing door and the driver, alone or accompanied, becomes a passenger. This asymmetric layout frees up a different type of space underneath the clear glass canopy, with the passenger enclosed in a sensuous capsule, snug in a ventilated, massaging seat that stretches back like a deployed bird’s wing, with a feather star motif crowning the top of the back. Travelling with the autonomous mode engaged is an exceptional experience as other senses than touch come into play, including enjoyment of the hi-fidelity sound bar that forms the ‘dashboard’.

The see-through electro-chromatic glass floor provides a view of the road as it flashes beneath the car, while the cocoon’s lavish blend of leather, wood and metal draws the eye and settles the mind. The association of navy blue and rich red hues softens the light that enters the car, while the fluidity of the lines is accentuated by the absence of screens, with the role of the familiar tablet display played by the car’s glazed surfaces.

The passenger benefits from a reassuring, protective environment, including filtered, scented air that plays a part in the impression of exquisite refinement as the occupant is swept away by the driver in the cockpit, or alternatively by the car in autonomous mode. An additional seat even makes it possible to travel three-up.

In addition to being connected to the outside world, a personal assistant – IRIS, which takes the form of a hologram – tends to the vehicle’s functions.

Taking a step back from preconceived ideas has resulted in a car that is as ‘light as a feather’ and as ‘silent as a breeze’, forged by its creators’ passion, for people who are passionate about cars.

Located within the front wheels, the two motors selected as the source of the all-electric DS X E-TENSE’s power provide unrivalled response. For road use, peak power stands at 400kW (540 horsepower), a figure that rises to 1,000kW (1,360 horsepower) in ‘circuit’ mode which allows the driver to savour the exquisite performance of the suspension engineered by DS Performance, the technical team behind DS’s Formula E programme. The carbon fibre chassis sits on innovative springs and torsion bars, while traction, grip and deceleration is controlled by an advanced active system conceived to optimise performance, whatever the type of road surface.

Imagining a dream car for 2035 led DS Automobiles to create an asymmetric, three-seat concept founded on a unique association of two vehicles in one that allows owners to select the driving mode that matches their need of the moment. Due to new technology, the body is capable of recovering its original form after an impact, while the configuration of the front grille and the DS X E-TENSE’s cooling capacity adapt to the driver’s whims. Thanks to DS LIGHT VEIL light curtains, the brightness of the lights adjusts as a function of the requirements of the occupants, the car and its surroundings.

Designed to serve as a vision of what a dream car might resemble in the Year 2035, DS X E-TENSE is the star of a film that is to be given a première airing on the five continents where DS Automobiles is most active.