The DS 7 CROSSBACK is set to make its debut on the small screen on the evening of Sunday 4 February. The new model – including the La Première limited edition – was unveiled to great fanfare in Paris, as French President Emmanuel Macron took a ride down the Champs-Elysées in his very own DS 7 CROSSBACK. And after touring cites in France and around the world, the new SUV is now available to customers across the exclusive DS Automobiles network. The launch campaign for the first second-generation DS model encapsulates everything that sets the brand apart, embodying French expertise in luxury in its cars – the perfect blend of refinement and cutting-edge technology. And the campaign slogan, “Audacity drives to excellence”, typifies the brand’s avant-garde spirit. 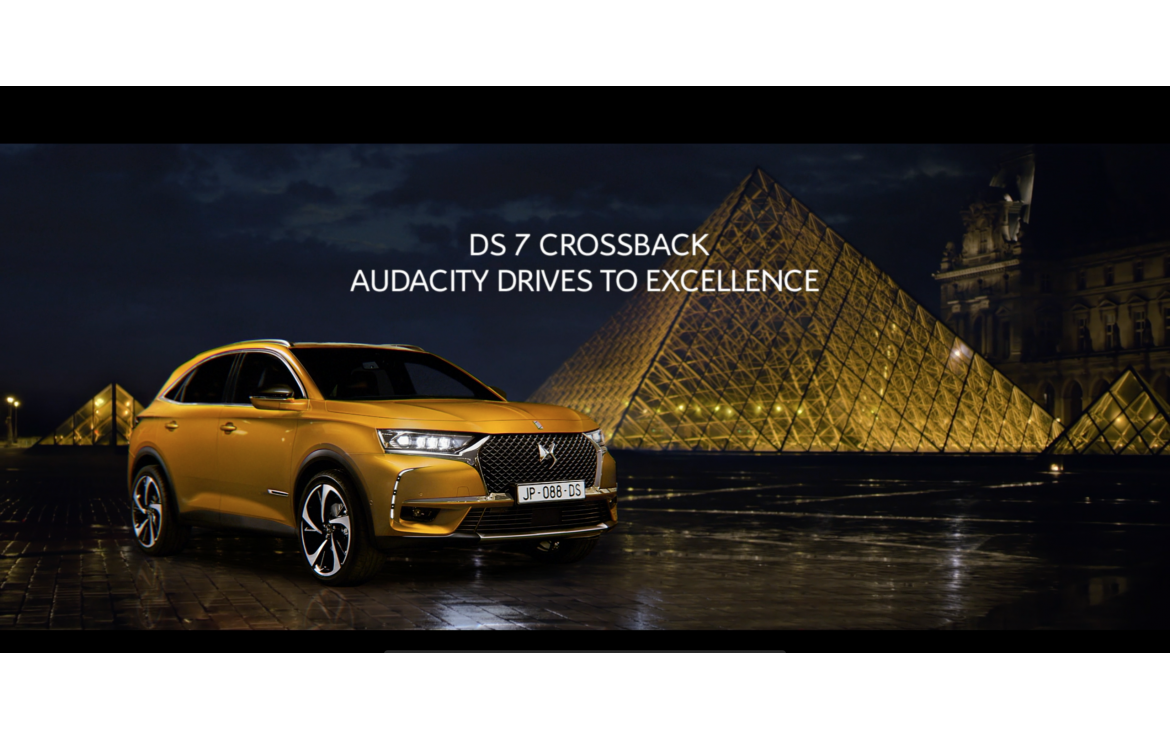 “The launch campaign slogan speaks volumes for our ambition,” said Arnaud Ribault, Vice President of DS Sales and Marketing. “It needs audacity to do what we’ve done – launching a new French automotive brand in today’s global premium market. And excellence is about fusing French savoir-faire in luxury goods with the DS brand’s cutting-edge technologies and the skill of its designers, engineers and craftsmen.”

DS Automobiles has chosen Paris – a city famous for its bold spirit and stunning architecture – as the face of its global launch campaign.

The brand has teamed up with creative agency Publicis La Maison and director Rob Chiu (Standard Films) to produce a film to mark the launch. The piece takes viewers on a night-time drive around some of the city’s most iconic sights like the Louvre Pyramid, the Eiffel Tower and the Louis Vuitton Foundation building – each echoing the DS 7 CROSSBACK’s tenacious styling, and each, in their day, sparking controversy between avant-gardists and traditionalists. And every time, it was the avant-gardists who won out.

The film is an allegory for the history of DS Automobiles and its new flagship SUV, showing how those who pursue excellence must push boundaries, tear up the rulebook and forge their own path.

In a fiercely competitive yet increasingly standardised market, DS Automobiles has always done things its own way. That will never change. The brand’s appeal to avant-gardists everywhere is distilled into its campaign slogan – “Audacity drives to excellence”.

The DS 7 CROSSBACK is the first of the second-generation models from DS Automobiles, ushering in a new era. With its charismatic design, cutting-edge technologies and refinement down to the last detail, it offers drivers peace of mind at the wheel. The DS 7 CROSSBACK, the new SUV by DS, encapsulates the brand’s ambition – to embody French expertise in luxury in its cars.