NEW CITROËN BERLINGO VAN: LIKE TRADESPEOPLE, IT DOES IT ALL!

To support the launch of New Berlingo VAN, Citroën is unveiling an advertising campaign which is more ‘Inspired by Pro’ than ever with two original films. Each one showcases the daily work of a tradesperson and their apprentices on board the newly-crowned ‘International Van of the Year 2019’! The campaign humorously shows how the van provides the professional, preoccupied by their many activities, with the best partner to be sure of not forgetting anything and coping with all situations, with as a conclusion: ‘New Citroën Berlingo Van, like you it does it all.’ Broadcast in France from 17 November, these new advertising films can be previewed at: https://bit.ly/2QLwpcV 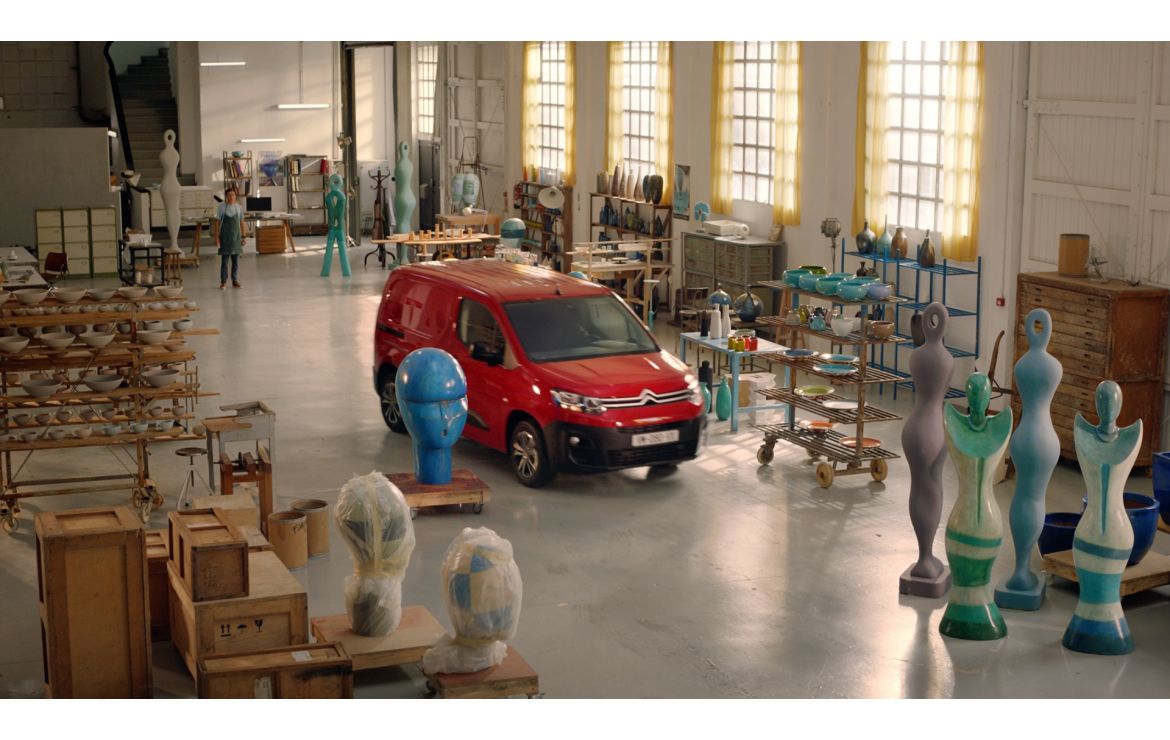 For the launch of New Citroën Berlingo Van, Citroën has chosen an advertising campaign made up of two films, each showing one of the two new versions of its commercial vehicle: Driver and Worker.

- In the ‘Driver’ film, a ceramic artist needs to carry out a fairly risky reversing manoeuvre in the middle of some statues. He accomplishes this manoeuvre without a problem thanks to the Surround Rear Vision technology, one of 20 driving aids fitted as standard.

- In the ‘Worker’ film, thanks to the Grip Control with Hill Assist technology, an entrepreneur picks up the apprentices left behind on a construction site.

Produced by Justin Reardon and set to the track ‘Summer Light’ from the band Tample, this campaign is broadcast in France from 17 November 2018, as well as in Europe, over the course of the launches between now and the end of the year (Spain, Netherlands, Italy, Germany, Portugal, Belgium, United Kingdom).
The campaign is rolled out in the press and digitally.

CITROËN INSPIRED BY PRO: DOING IT ALL

Since the start of 2018, Citroën and its agency Traction (BETC Group) have put in place a new communications framework for the whole Citroën Pro commercial vehicle range: Doing It All.

In addition to perfect mastery of their professional activity, a tradesperson must now master all of the other aspects linked to their business. This ranges from the training of apprentices and accounting through to digital search engine optimisation.

With Doing It All, the Citroën range of commercial vehicles is developing to meet these new needs: a commercial vehicle combining strength, ease of loading, modularity, etc., while becoming a real mobile office and having many connectivity, driving aid and Citroën comfort technologies.

The Brand’s ‘Inspired by You’ signature is in this way very naturally adapted to the world of business and the target customer base of tradespeople with ‘Inspired by Pro’.

That New Citroën Berlingo Van has been voted ‘International Van of the Year 2019’ is down to it providing an effective response to the needs of professionals. It presents a solution adapted to each activity and to each use (size M and XL, Extenso cab, payload, etc.).

It now goes even further to improve its product offering with the availability in its commercial range of two new versions, Worker and Driver:

- ‘Driver’, specially designed for businesses and their employees who need to make long journeys or numerous deliveries in an urban area. It puts the emphasis on comfort and offers many driving aids, like for example the Surround Rear Vision technology. This new innovation (like the overload indicator) monitors the side and rear surroundings, in both reverse and forward gear, using two sensors – one located on the passenger side exterior mirror and the other above the side-hinged doors.

- ‘Worker’ designed for professionals transporting equipment and colleagues on all types of construction sites with for example Grip Control with Hill Assist Descent, raised ground clearance and an increased payload of 1,000 kg.

An international automotive brand at the heart of the mainstream market, Citroën has cultivated boldness and creativity since 1919. Standing apart through their design and ensuring well-being through comfort and technology, Citroën cars like the New C3 and the New C3 Aircross Compact SUV, bring a breath of fresh air to the automotive world. The brand is popular in its noblest sense: its main source of inspiration is people and their lifestyles. This spirit is captured in its signature: “Inspired by You”. It also finds expression through a unique customer experience with its city store concept ‘La Maison Citroën’, its online opinion site ‘Citroën Advisor’ and mobility solutions such as Citroën Rent & Smile and Citroën Earn & Drive. With 10,000 sales and after-sales points in nearly 80 countries, Citroën sold 1.1 million vehicles in 2017. The Brand has also amassed eight Manufacturers’ titles in the World Rally Championship and won three consecutive Manufacturers’ title in the FIA World Touring Car Championship.