Before the Duetto, the Giulietta Spider starred in Italian films at the beginning of the 1960s, directed by Fellini and Antonioni: these are the dress rehearsals before Made in Italy charisma conquers Hollywood and the USA. 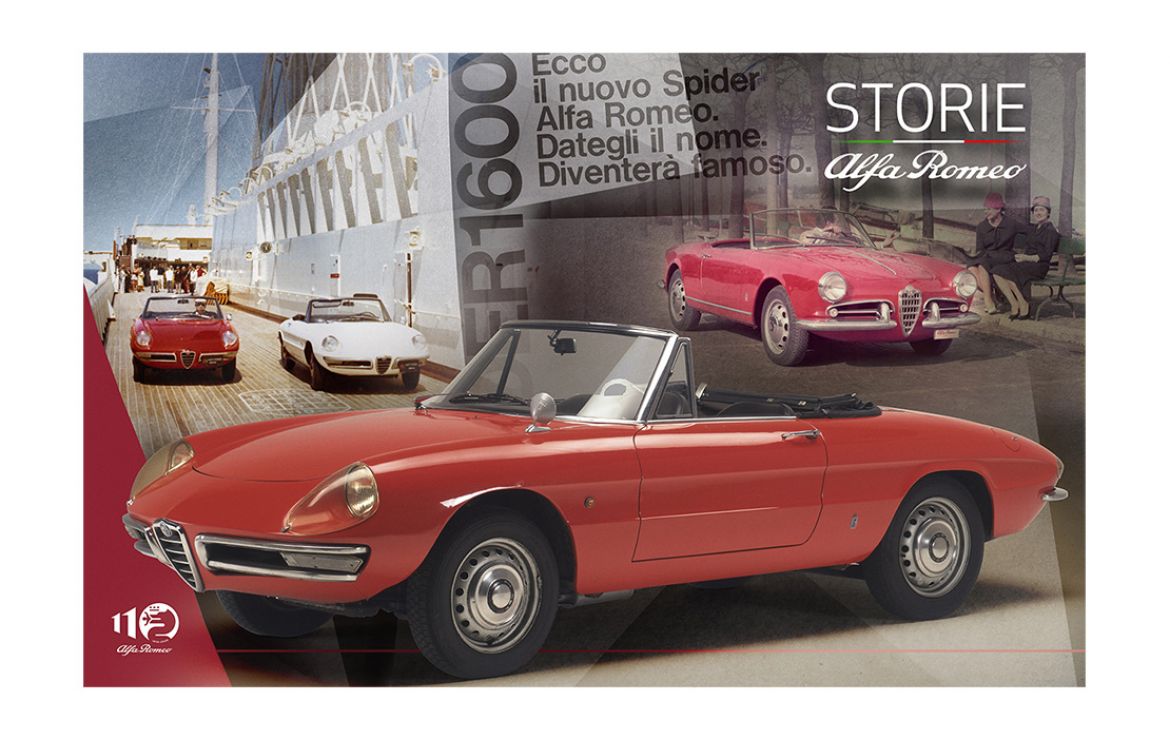 “It is a very forgiving car. Very pretty, too.” That’s what an exceptional gentleman driver said about Duetto: The legendary Steve McQueen, in the summer of 1966, having been invited by Sports Illustrated to try the Italian spider, along with other "fast friends". The model he drove was one of the first Alfa Romeo 1600 Spiders to arrive in the USA, after its debut at the Geneva Motor Show a few months earlier. In a few words, McQueen’s judgment sums up the essence of Duetto and the uniqueness of Alfa Romeo: driving pleasure and pure beauty.
Technically, his was an authoritative opinion. Steve McQueen was a supercar collector and a skillful driver, who finished second in his category at the 1970 Sebring 12 Hour event, paired with Peter Revson.
A year later, a young Dustin Hoffman was driving a Duetto at full speed to the music of Simon & Garfunkel in “The Graduate”. Iconic images that became sculpted in film history, launching a whole series of quotations where the Duetto was seen being driven in hundreds of films and TV stories, becoming a cult in its own right. When he was World Heavyweight Champion, Muhammad Ali had a Duetto: copying his famous motto “Float like a butterfly, sting like a bee”, he had his numberplate customized to read “Ali Bee”.
Thus the Duetto became an international star. Meanwhile, let's take a look back in time at the Duetto’s roots... in the technical innovation of the Giulia and the charisma of the Giulietta Spider.

The story of the Giulietta Spider also contains a protagonist called Hoffman. Not the actor, Dustin, but the businessman Max Edwin Hoffman: an ex-racing driver, forced by Nazism to abandon Austria for the United States, who in a few years became the reference American importer for European car manufacturers.
Max was much more than a simple "trader": he had a profound expert knowledge of the market. He gave advice on commercial policies, asking for specific models, suggesting style variations and contributing to the creation of some of the most passionately admired sports cars ever made – one of which was the Giulietta Spider.
A lady that became an obsession for Hoffmann. He began asking Alfa Romeo for her in 1954, immediately after the launch of the Giulietta Sprint. He felt it would become the perfect car for the Pacific Coast, convinced that everyone in Hollywood would want one. So confident was he of its success that he said he was willing to buy several hundred, even before he had seen the final designs!

Hoffman managed to convince Francesco Quaroni and Rudolf Hruska, and the project was launched. A style competition was set up between the two designers of the moment: Bertone and Pinin Farina. Bertone came up with an extreme vision, the daughter of Franco Scaglione's "2000 Sportiva" concept: pointed front, streamlined headlights and rear fins. Pinin Farina's proposal was designed by Franco Martinengo, and was chosen on account of the elegance and classic balance of its shapes.
“The beautiful young lady", as Pinin Farina described it, began with a panoramic windscreen and sliding side windows. It also had no handle inside the door: instead, a rope activated the door opening. Only later would a traditional windscreen appear, plus descending side windows, equipped door panels, folding roof, external handles and new interiors.
A pure sports concept, confirmed by its extremely brilliant performance. The Spider adopted the Giulietta engine: a 1,290 cm³ in-line four-cylinder engine, which delivered 65 horsepower and thrust the car up to 155 km/h. Power continued rising in subsequent versions, starting with the 1958 80-horsepower Spider Veloce.
Flexible, young and quick. And beautiful. Giulietta Spider adored the cinema: Fellini gave her a role in "La Dolce Vita", Antonioni chose her as Alain Delon’s car in “The Eclipse”. She become a status symbol: loved by famous people, desired by everyone.

The time came when an heir had to be conceived for the Giulietta Spider. Luraghi and his team were aware that making an excellent car would not be enough: the same aura of charisma was needed. Its presentation must be a major event: a solemn ceremony, somewhere between an investiture and a coronation.
Alfa Romeo wanted something massive. So, for the USA launch it organized a transatlantic luxury liner cruise, inviting the most exclusive celebrities from show business, sport and fashion. There were 1,300 VIPs on board, including Vittorio Gassman, Rossella Falk and the soprano Anna Moffo. The Italian turbine liner Raffaello sailed from Genoa to New York, with a stopover in Cannes on the occasion of the Film Festival. During the entire cruise, three examples of the new Spider were displayed extravagantly on the ship's bridge: one green, one white and one red. By repeatedly highlighting the Italian nature of its product, Alfa Romeo anticipated the "Made in Italy” communication drive by over a decade.

The Alfa Romeo Spider 1600 was born on a Giulia base, with the wheelbase reduced to 2,250 mm; the mechanics were those of the contemporary Giulia Sprint GT Veloce (an evolution of the Sprint GT). At its launch, Duetto was equipped with the classic 1,570 cm³ twin-cam 4-cylinder engine in light alloy, capable of generating 108 horsepower and with a dry weight of less than 1,000 kilos. Its maximum speed was 185 km/h.

Finding a name for the model was a story in itself. A prize competition was organized in collaboration with all its European dealers. "Duetto" won... but a problem with rights emerged (due to a chocolate biscuit with the same name), and this required the car to be launched as "Alfa Romeo Spider 1600".
The name Duetto remained in the background, but was consolidated in the memory of fans and became the nickname of all the car’s generations. Others will be added: the 1966 Spider, the first of the series and the last masterpiece by Battista Pinin Farina, was called "Cuttlefish Bone" due to its ellipsoidal shape, with rounded front and tail, convex sides and very low belt line. The second was the 1969 "Coda Tronca", or Short Rear, eye-catching for the aerodynamic cut of its rear. The third is the "Aerodinamica" of 1983, named after its lengthy trials in the wind tunnel. In 1989 the last generation arrived, the so-called "IV Series"... a car with a clean and streamlined body, almost a return to its origins.
Four generations, more than 124,000 exemplars produced in 28 years: the longest life ever for an Alfa Romeo model.