“Storie Alfa Romeo” Episode one: driving on-board the 24 HP, from the origins to the first international victories (1906-1925)

Stories and characters from the early 20th century, centered around the first car: an elegant torpedo at speeds of a hundred kilometers per hour 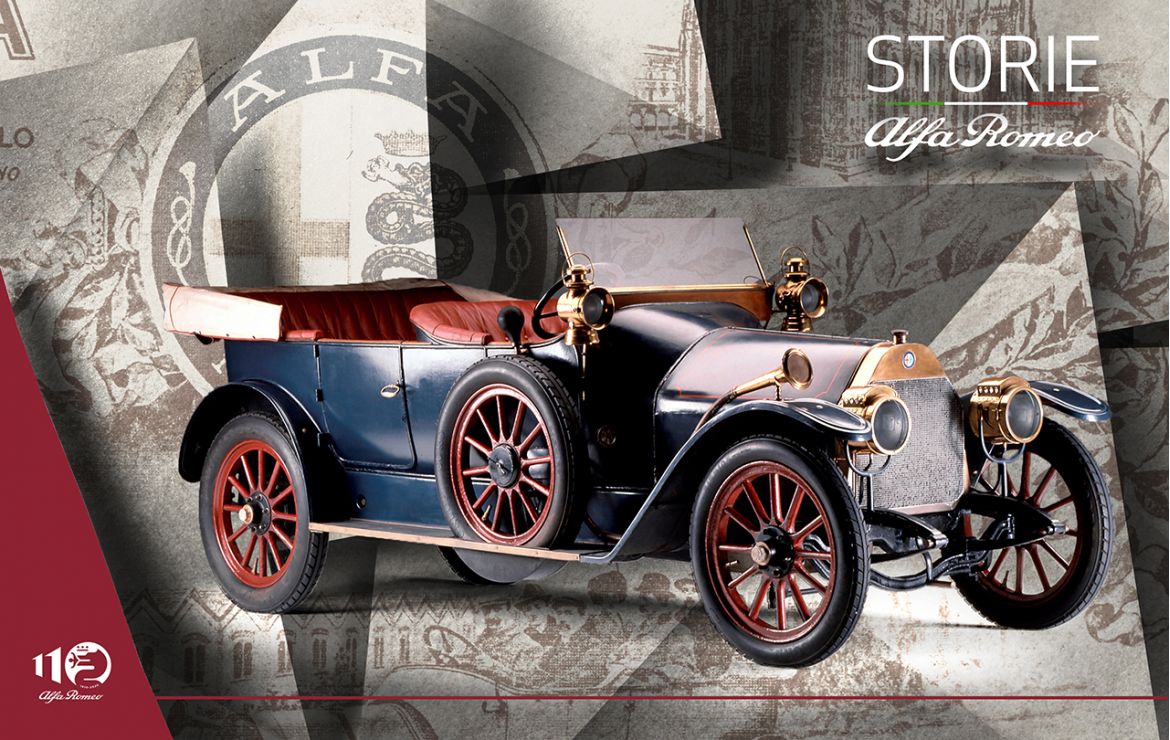 Stories and characters from the early 20th century, centered around the first car: an elegant torpedo at speeds of a hundred kilometers per hour

The Frenchman from Naples

Officially our story began on the 24th of June 1910, with the foundation of the A.L.F.A. (Anonima Lombarda Fabbrica Automobili). But we’ll start a few years earlier, with a colourful character: a Frenchman with a handlebar mustache and an outstanding instinct for business.
Pierre Alexandre Darracq began his career running a bicycle factory in Bordeaux, before falling in love with automobiles. So, he began producing motorcars in France and making a success of it. Then he decided to export them, opening branches in London and then Italy. In Italy he began operations in Naples in April 1906. But Naples was a long way from France and the journey was complex and costly. So, by December he had transferred production to Milan, at number 95 in the Portello district.
But along with the logistical difficulties he realised that there were also market problems. Car sales in Italy were struggling: only a few thousand cars on the roads, and generally low average purchasing power didn't help. To make things worse, compared to France, prospective customers in Italy had different expectations: Darracq’s cars were light and inexpensive, lacking power for Italian tastes. In late 1909, Darracq put his company into liquidation.

The Cavalier from Milan

But someone else was convinced of the Portello factory’s potential. Cavalier Ugo Stella, managing director under Darracq, moved quickly to find local funding and a guarantee from Milan’s Agricultural Bank, then took over the factory and re-hired the over 200 people who worked there. An ambitious and definitely risky move... but Stella's was one of the many daring intuitions with which the Alfa Romeo Story would be paved. He knew his job well, had weighed up the risks and understood which cars his customers desired. Plus, he had an ace up his sleeve: he’d found the man to design it.

The surveyor from Piacenza

Giuseppe Merosi had been a quantity surveyor in Piacenza. But like many young men at the time, he’d been seized by a passion for motorcars and had worked in various roles in the sector.
In the autumn of 1909, Stella asked him to create two completely new cars in the power ranges of 12 and 24 HP: more powerful than the Darracq, suitable for the tastes of Italian customers and with a frame enabling the mounting of prestigious bodywork.
In his lodgings in Milan, at Via Cappuccio 17, the young engineering designer worked night and day, and on the 1st of January 1909 he consigned the plans for the first car to the Technical Office.

Perhaps for the only time in the history of motorcars, the vehicle model was created before the Brand that would sell it. The 24 HP had a monobloc engine (uncommon at the time), 4 cylinders, 4 liters of displacement and 42 horsepower, with a single cardan transmission for the rear wheels. It had a sturdy frame with side members and crosspieces in C-pressed sheet metal, enabling the coach builders Castagna, Schieppati, Sala and Bollani to develop torpedo and limousine versions for a highly demanding clientele. The 24 HP aimed high from the start: today we would call it a Premium model, costing about two years of an employee’s wages.
It also went fast from the start, reaching 100 km/h, and was built with extraordinary care and precision. This meant that not only did it “go fast”, it also delivered outstanding road performance. No wonder it was so well received. The first A.L.F.A. was already a true Alfa Romeo: elegant and sporty, technologically avant-garde and projecting unmistakable charisma. This would be the Brand’s magic formula throughout its long history: an iconic enchantment that makes it unique in the annals of the motorcar.
Merosi realized that he was on the right track, and put his foot down on the accelerator. By 1911 he had developed the 24 HP Corsa: less weight, more power and more thrust... a bit like today’s GTA. And with this model, just a year after its foundation, A.L.F.A. entered the world of racing. The first victory came in the Parma-Poggio di Berceto race in 1913: the driver Nino Franchini came second overall and first in his category.

For a fledgling Brand, racing was the best way to make its name. Well aware of this, Merosi decided to take the plunge and build a racing car with a new concept engine. By 1913 the 40/60 HP was ready.
Castagna, the coach builder, had been requested by Count Ricotti to model this A.L.F.A. chassis on the principles of a new science: aerodynamics. The result was the 40/60 HP Aerodynamic Ricotti Torpedo, a creation straight from a Jules Verne novel, capable pf reaching a speed of 139 km/h.
But the outbreak of the first World War changed the playing field for everyone, including A.L.F.A., which was called upon to contribute to military needs. But change means opportunity, and on 2 December 1915 the Limited partnership company named Engineer Nicola Romeo & Co took over the Portello factory, reconverting it to manufacture ammunitions and aircraft engines. The original production department was flanked by a new smelting works and foundry, equipped with machine tools and equipment purchased directly in the United States. A few hundred employees soon rose to over 1,200.

Nicola Romeo, a future Senator of the Kingdom of Italy, is another vital figure in our story. During the war he bought up major machinery engineering companies such as “Costruzioni Meccaniche di Saronno”, the “Officine Meccaniche Tabanelli” in Rome and the “Officine Ferroviarie Meridionali” in Naples. He renamed his company, which became the “Engineer Nicola Romeo Anonymus Co.” ... and when the Banca Italiana di Sconto asked for the liquidation of A.L.F.A., he was ready to buy it.
This led to a battle with the previous owners concerning the name, so Romeo decided to sell his products by combining Alfa with his surname Romeo. The first vehicles to bear the name of the new Brand were the 20-30 HP and its derivative the ES Sport. Cars that followed the path begun by Merosi before the war: elegant, fast and with an unmistakable personality.
In the post-war years, race drivers like Giuseppe Campari, Antonio Ascari, Ugo Sivocci and the young Enzo Ferrari made their way onto Europe’s front pages. Mugello, Parma-Poggio di Berceto, Targa Florio, Aosta-Gran San Bernardo, Coppa delle Alpi: Alfa Romeo was always among the prizes. All that was missing was the first international triumph.

The Italian answer to the world’s most elegant vehicles: thus wrote the British press of the new Alfa Romeo RL when it was presented at the London Motor Show in November 1921. The RL once again rewrote the rules of motoring. It was probably Merosi’s masterpiece. A 3-liter engine, with 56 horsepower, a 6-cylinder monobloc with removable head, valves controlled by a rod and rocker arm system: the RL reached speeds of 110 km/h, but with impeccably precise control.
In 1923 Merosi produced two special Corsa racing versions from his top hat, their weight slimmed down to 980 kg. They were designed to win the famed Targa Florio race... and they did.
In April, Ugo Sivocci took his place on the starting line with a green quadrifoglio four-leaf clover painted on a white background at the side of his car. The good luck charm did its job: Sivocci triumphed in the 15th Targa Florio (the first of a long series), and the Quadrifoglio became part of the Brand’s history.

The designer introduced by Ferrari

The time had come to separate mass-produced series from special Gran Prix racing cars. It was Enzo Ferrari who suggested the right man for the job: Vittorio Jano was a young engineering designer from Piedmont who had worked for FIAT and was a specialist on the architecture of engines and frames.
He brought revolutionary ideas to Alfa Romeo, such as the forced induction of low displacement engines. Winning ideas: Jano’s GP P2, with Ascari at the steering wheel, crushed all competitors on the Cremona circuit, at an average speed of over 158 km/h.
The P2’s victories brought Alfa Romeo to the pinnacle of the world of motor racing. And in 1925 Alfa Romeo triumphed at the First Gran Prix World Championship, recognized and organized by the International Association of Recognized Automobile Clubs. To celebrate the victory, the Alfa Romeo logo was surrounded by a laurel wreath.