• Stars of the show will be the 695 Biposto, dubbed the ‘smallest supercar’, and the new 695 Biposto Record, created to celebrate Carlo Abarth‘s many records. • The new special 595 Yamaha Factory Racing Edition, springing from the prestigious partnership with Team Movistar Yamaha for the 2015 and 2016 racing seasons, will also be in the spotlight. 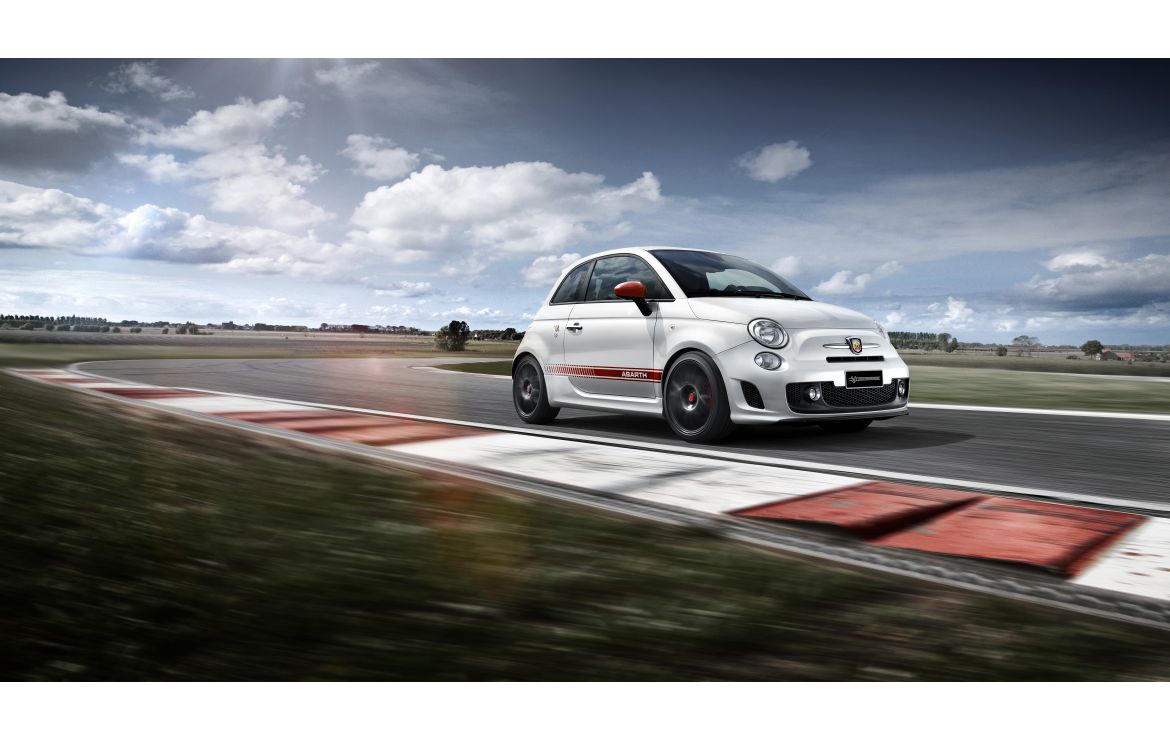 Abarth returns to the international stage at the Frankfurt International Motor Show 2015 to tell a history of records which continues to this day. The star of the show will be the Abarth Biposto 695, dubbed the 'smallest supercar'. The well-known and greatly appreciated version will be showcased next to a limited edition created to celebrate the 50th anniversary of Carlo Abarth's record achieved on the Monza circuit.

Visitors to Frankfurt will also be able to admire a special version of the 595 Yamaha Factory Racing series prepared exclusively for the Motor Show and motorsport talent Mick Schumacher's F4 single-seater, which is competing in the ADAC Formula 4 Powered by Abarth championship and reasserting Abarth's relevance as the brand which most closely expresses the race track spirit, sporting values and desire to excel.

At focus of the history and the heart of all models sporting the Scorpion trademark is the 1.4 T-Jet engine which is so versatile, powerful and reliable that it has been picked to equip all Abarth road cars and those competing in single-brand trophies for the past six years. Visitors will see a specific version created for the German event.

Performance of the Abarth 695 Biposto is excellent. Weighing in at only 997 kilograms and fitting a 1.4 T-Jet engine, boosted to 190 HP for the first time on a road car, the car has the best weight-to-power ratio (5.2 kg/HP) and the best acceleration (from 0 -100 km/h in 5.9'') in its category. Top speed is 230 km/h. Peak power is delivered at 5500 rpm and top torque is 250 Nm at 3000 rpm. The 139 HP/litre specific power is remarkable and sets a new record in its class. Finally, a dog ring gearbox with racing derived controls and disc and clutch self-blocking differential are fitted for the first time on a street legal car. The system makes shifting so fast that expert drivers do not need to use the clutch to shift up.

The 695 Biposto stands out for a number of pronounced, 'muscular' external features. The front bumper has been entirely restyled to maximise air flow with the addition of a large aerodynamic carbon fibre insert. The same is true for the rear bumper sculpted to maximise the air flow conveyed to the carbon fibre extractor and allow the installation of the Abarth by Akrapovic exhaust system.

Wind tunnel test results were used to re-design the rear spoiler, which is now more pronounced, whilst tough proving ground trials were used to guarantee maximum heat disposal from the braking system by cleverly designing the OZ 18" 'ultra-light' rims. The broader track called for the adoption of a new body kit with larger wheelhouse and special side skirts, which also feature carbon fibre inserts.

The interior style combines technology with attention to detail. The rear roll bar is made by Poggipolini, famous for very-high-precision mechanical constructions and weight reducing structural solutions. A cargo net is hooked to the roll bar to contain baggage, while the four-point seat belts convey an adulterated racing feel and are made by Sabelt, racing world leader and technical partner of many teams and pro drivers.

Sabelt also made the Abarth Corsa anatomical seats. The 'Abarth Corsa by Sabelt' seats have a composite material or carbon fibre shell and electrically sealed Alcantara and titanium-coloured leather, with unique finishes and colours for an Abarth.

The bodywork features a unique matte 'Grey Performance' paint job, embellished by titanium trim on the front whisker, the door handles and the tailgate handle.

At 57 years of age, Carlo Abarth decided to break a new record, namely acceleration in a class G car at the Monza Racing Track. He had not raced for some time and, not being able to find the right driver, he decided to lose 30 kilograms of weight to slip into the tight cockpit himself. His efforts were rewarded in October 1965: Fiat Abarth '1000 Monoposto Record' Class G, 105 HP, broke the acceleration record over a quarter of a mile and 500 metre distances. Not by chance 'performance is a state of mind' for Abarth.

The Abarth 695 Biposto Record celebrates the 50th anniversary of the feat. It is characterised by an exclusive 'Modena Yellow' livery embellished with 'Tar Cold Grey' titanium front whisker, door handles and tailgate handle, enamelled '695 Record' badge on the side and aluminium bonnet. Inside, features include special instrument panel animation, carbon shell seats and numbered plate. Performance is secured by a mechanical self-locking differential combined, for the first time ever, with a manual gearbox (instead of a dog clutch gearbox). This result is the perfect blend of performance, craftsmanship and care for details. This limited edition, of which only 133 have been made, like the number of records held by the Scorpion brand, also fits 18' rims, oversized Brembo brakes and Akrapovic exhaust.

Focus will also be on the new Abarth 595 Yamaha Factory Racing Edition, a special series springing from the prestigious partnership between the Scorpion brand and Team Movistar Yamaha. To make this car, Abarth and Yamaha joined forces and tuned it just like a racing motorbike focusing on engine power (increased from 140 HP to 160 HP), BMC filter, suspensions and shock absorbers (front and rear Koni shock absorbers with FSD valve and Eibach springs), 17'' rims and the iconic Record Monza exhaust. The Abarth brand has always been the byword for racing in the automotive industry, and in 2015 and 2016 it is Official Sponsor and Official Car Supplier of the FIM MotoGP Championship team with official riders Valentino Rossi and Jorge Lorenzo.

The Abarth 595 Yamaha Factory Racing Edition will be available with six body colours. The version showcased at the motor show has a white livery, contrasting with 17" matte black alloy rims, while the red brake callipers are picked up on the Abarth stripes on the doors. Privacy windows complete the exterior lock of the Abarth 595 Yamaha Factory Racing Edition, while on the inside equipment includes flat-bottom leather steering wheel, leather seats and aluminium pedals. The car on show also fits an automatic climate control system and parking sensors.
The 'Yamaha Factory Racing' logo stands out on the tailgate to celebrate the remarkable prize record of six championships won since 2004 making it one of the most successful teams in the world. Similarly, Abarth is reasserting its relevance as the automotive brand which more than any other can convey the race track spirit, shared sporting values and desire to excel which run in the Scorpion's DNA.

From the technical point of view, the racing character is asserted by the 1.4 T-Jet 160 HP engine and the Record Monza tailpipe. The Abarth Koni suspension kit, including front and rear shock absorbers with FSD valve and front and rear Eibach lowered springs, was chosen to improve reactivity and steering precision and to enhance the driving feel.

The Frankfurt line-up will be completed by Mick Schumacher's F4 single-seater. The young up-and-coming motorsport talent is showing great skills in the ADAC Formula 4 Powered by Abarth Championship organised by the FIA to offer young drivers the chance to debut at the wheel of a real racing single-seater. In the wake of last season's success in the Italian F4 Powered by Abarth Championship, the ADAC (German Federation) chose the same Tatuus single-seater equipped with Abarth T-Jet 160 HP engine.

In Germany, the ADAC Formula 4 Powered by Abarth met with great success from the start, with no fewer than 18 teams and 42 young drivers. One was Mick Schumacher, the son of the Ferrari world champion Michael. The first edition of the German ADAC F4 Championship consists of eight events. It started on 25 April on the Oschersleben circuit and will end at Hockenheim on 4 October.

The Abarth stand reflects the style elements which characterise the brand, like the scorpion trademark on the central tower announcing the 'Performance is a state of mind' slogan. The space is delimited by a large screen showing inspiring clips of the dynamic cars in action and a white-and-red chequered wall in leading the eye to the cars. The impression is that of having just crossed the finish line.

An area of the stand will display a selection of merchandising and exclusive Abarth accessories created in collaboration with Mopar, FCA's reference brand for services, customer care, genuine spare parts and accessories.

Finally, through brochures and dedicated material at the stand, visitors can learn more about the products of FCA Bank, a financing company specialised in the automotive sector. The company operates on the main European markets and in Germany with FCA Bank Deutschland GmbH with a sole mission: to support automotive sales for all FCA brands by offering innovative financial products complete with added-value services dedicated to the dealer network, private customers and companies.